The Roy siblings are deeply haunted by their upbringing. Succession keeps finding ways to show that. Kendall Roy spends a stressful moment as we all must: staring at his phone. , HBO

In a famous 1919 essay on Hamlet, T.S. Eliot reintroduced the “objective correlative,” a previously obscure literary concept, to the world of criticism, causing it to rocket to critical omnipresence across the first half of the 20th century.

I think the idea of the objective correlative relies a little too heavily on every single audience member reading every single symbol in the same way, when we all bring our own emotions and thoughts to whatever piece of art we’re taking in. Yet it’s hard to deny that sometimes, a single image or object can carry far more emotional weight than any number of long, emotional speeches.

A well-chosen image — even the most over-obvious one you can possibly think of — can slyly push us into a kind of dreamlike state, slipping past our conscious mind and burrowing down to our subconscious. A speech will always engage the conscious mind and run a greater risk of ringing false.

If you want to see a great example of the objective correlative hard at work, just check out “Mass in Time of War,” the second episode of Succession’s third season, which features a box of doughnuts, soaked in dread.

So much depends upon a box of doughnuts, glazed with sweet frosting, sitting on a white table 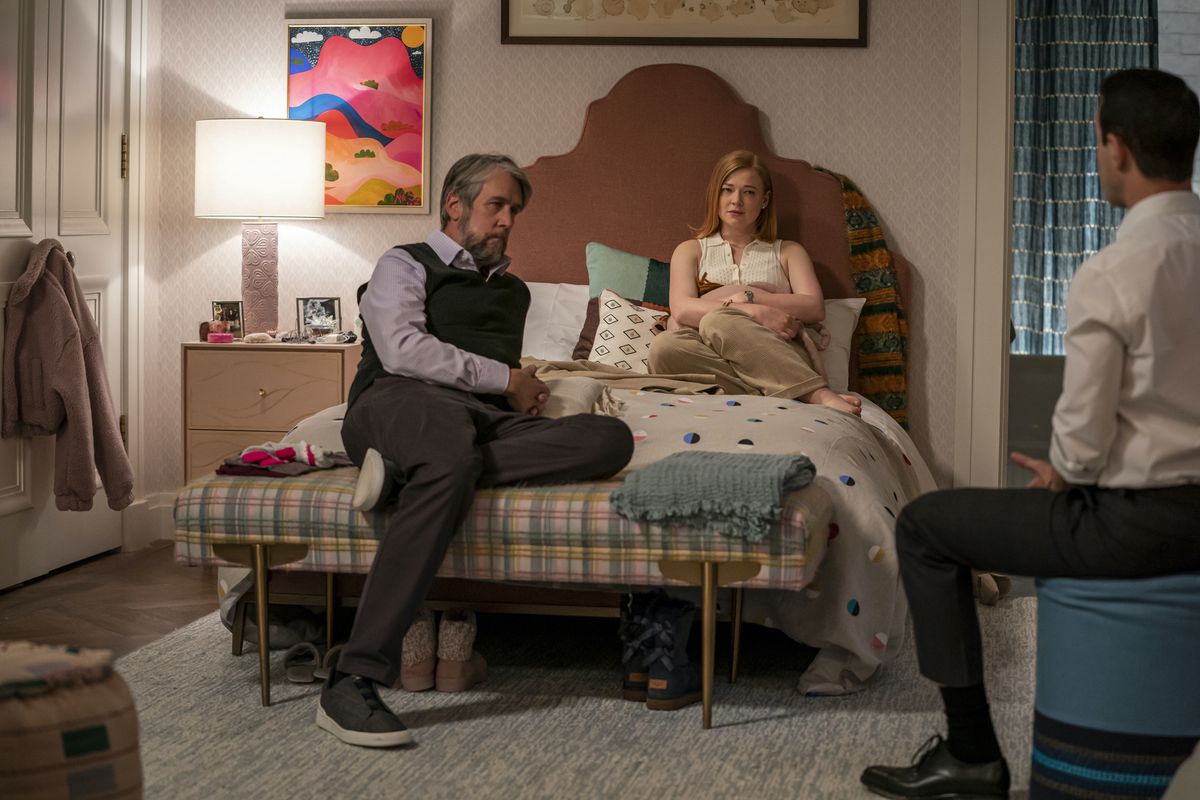 That bed doesn’t look all that comfortable for an adult to recline on, but what do I know?

The scene: Kendall Roy (Jeremy Strong), who decisively broke with his father, Logan (Brian Cox), at a press conference in the final moments of last season, has spent the hours immediately following that break shoring up his momentum. He’s hiring people to handle his publicity and legal matters. He’s trying to find allies within Waystar-Royco, the family business.

What he needs more than anything, however, is for at least one of his three siblings — and ideally all three — to step out with him in front of the press and make a joint statement: Logan Roy is no longer fit to serve in any capacity and should be replaced.

Kendall is probably right. Beset by scandal and reeling from multiple crises at once, Logan would likely be felled as the head of Waystar-Royco if all four of his children were to say he’s incompetent.

The dark, enthralling power of Succession

So, one by one, Kendall invites his siblings to gather at his ex-wife’s apartment. First Shiv (Sarah Snook), then Roman (Kieran Culkin), then Connor (Alan Ruck) drop by, ready to just feel Kendall out. They won’t acknowledge that they’re listening to what he has to say. “Officially,” they’ve all shown up as neutral parties or even as allies of Logan, ready to spy. (Roman comes right out and says his aim is to snoop.) But all the same, the more Kendall talks, the more you can see the three of them considering his pitch.

The episode never once has any of the characters so much as suggest they think Kendall has a point. But we in the audience might find ourselves speculating as to whether any of the characters are quietly siding with Kendall. As I watched, I thought it was clear Connor was starting to see things his brother’s way, and then I thought perhaps Shiv was as well.

Not that it matters, because Logan shows up to ruin the party.

The siblings start squabbling over the most obvious question of all: If Logan isn’t head of the company, which one of the Roy children should be? Kendall, who took this enormous, potentially stupid leap of faith, is pretty sure he’s the best choice. But Shiv thinks it should be her, and maybe she’s right. She is the one who’s least tainted by the various scandals dragging down the Roy family name.

They leave Kendall’s daughter’s bedroom (where they’ve been having their confab), only to find a box of doughnuts sitting on a table — sent over courtesy of their dad. Instantly, the tenor of the scene changes. Whatever momentum Kendall had completely dissipates, and all of a sudden, Logan is very much present in the room with his kids, even though he’s not physically there. The doughnuts are just doughnuts. Hopefully, they’re sweet and delicious. But to the Roy children, they’re also a subtle reminder from their dad: “Ah, ah, ah!” a spectral Logan seems to say, wagging his finger. “I’m always watching you.”

The other Roy siblings abandon Kendall in that moment, opting to side with their dad. Desperate, Kendall launches into a tirade that only makes the situation worse, and implies that Shiv has only gotten as far as she has because she’s a woman and because she’s been given power out of pity. (Like most things Kendall says in this episode, it’s not wrong, but it’s also a) not very nice and b) not 100 percent right either.)

Then everybody but Kendall is gone, and he has no idea why a box of doughnuts seems to have completely foiled his plans.

How the Roy siblings exemplify different experiences of parental abuse survivors when they’re suddenly confronted with a reminder of that abuse (a.k.a. doughnuts) 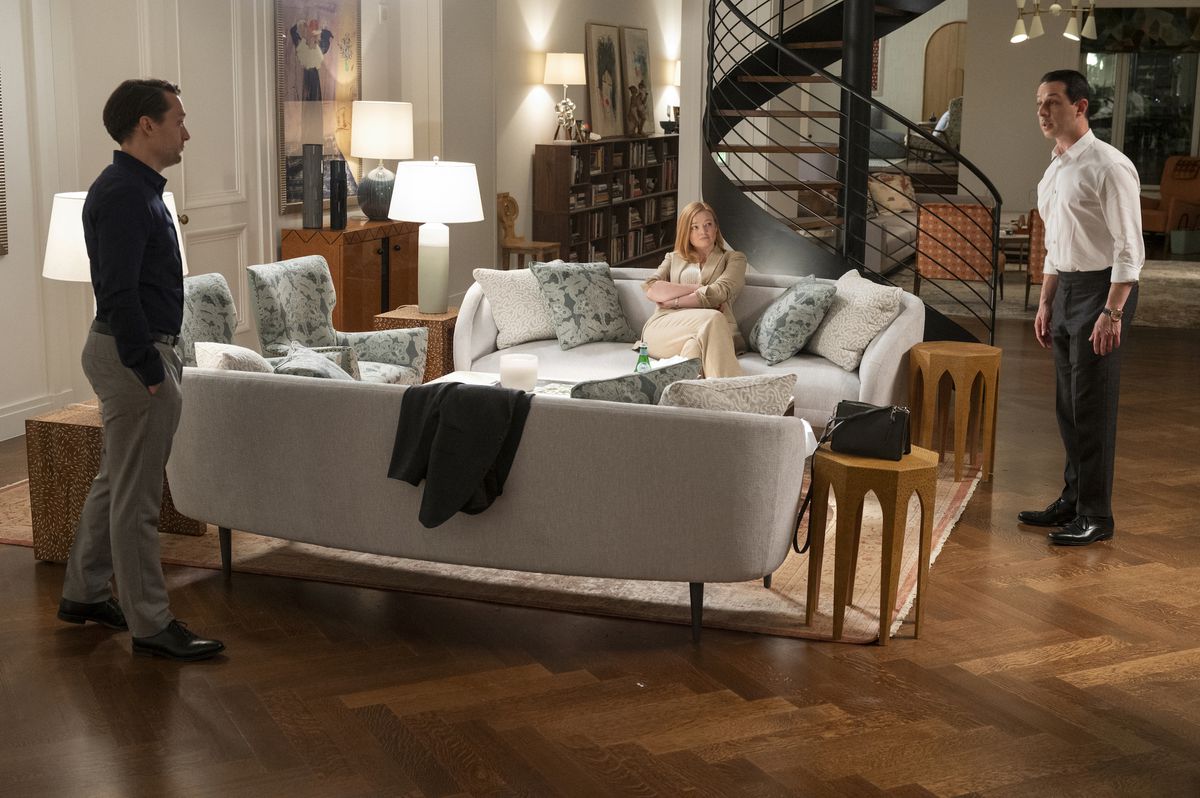 Across the first two episodes of season three, Kendall has been acting in an atypically manic fashion. The first two seasons of Succession featured, respectively, a Kendall who tried to get his way through brute force and a Kendall who had been ground into the dirt beneath his father’s heel. In season three, he’s racing around, spouting social justice language, and declaring that his dad is just the worst.

I use the words “religious convert,” but Kendall’s behavior is also typical of people who’ve left fundamentalist religious movements or people who’ve recently come out as some flavor of queer or people whose political beliefs fall outside of the traditional conservative/liberal dyad. Any time you feel like you alone have grasped some fundamental principle about the way the world works, even if you’re 100 percent correct, you run the risk of convincing yourself that you can see the truth about everything, and becoming just a little bit insufferable to those around you.

Reporting I’ve done for other, as yet unpublished, articles also informed how I thought about Kendall in this episode because this dynamic also often plays out in families where one or both parents were abusive. One of the children has a moment, usually in adulthood but sometimes earlier, when the glass shatters, and they suddenly realize the way they were raised was not okay. They often cut off their parents. But when they try to tell their siblings, their siblings haven’t had a similar epiphany.

Succession is exploring this exact scenario in season three. Kendall is absolutely right that his dad is a terrible person, but the ways in which he’s expressing that idea are an active turnoff to his siblings, who are still deeply ensnared in their father’s web. He keeps pushing them just a little too hard and a little too far, and they always snap back.

But we don’t need to have any of the characters say this because the doughnuts, a stark symbol of Logan Roy’s omnipresent terror, efficiently and elegantly express the fear that Logan instills in his children. The instant they notice the box of doughnuts in the room, only Kendall (who, remember, has seen through his father’s bullying) is able to identify them as the intimidation tactic they are. They’re just doughnuts! They’re not the literal, physical presence of Logan Roy! They’re a symbol, an image, an object! The objective correlative is never the actual thing it points to, but it makes you feel that thing (in this case dread) deeply.

So the other kids immediately begin to shrink away from the conflict they were thinking about entering. They’re out of the apartment. They’re back to Logan. Kendall understands what’s driving this response, asking them incredulously if they’re going to let themselves be rattled by a box of doughnuts. But, yeah. They are.

One of Succession’s smartest moves is the way it flips a common characteristic of the antihero drama — the main character is always six steps ahead — to reveal how “mastermind” status can mask toxic and abusive tendencies. If this story were told more uncritically from Logan’s perspective, the box of doughnuts would be presented as a brilliant masterstroke, a way of intimidating his children into doing what he wants without setting foot in the room.

Logan isn’t a mastermind, though. He’s just a bully, and in the absence of his love, his children have been warped by fear. Kendall clearly thinks he’s broken free of that fear, but it seems much more likely that he’s just running scared. It would be so easy to let fear overcome him all over again, so he has to keep going and going and going. Shiv, Roman, Connor — they’re all still in its grip, and once Logan makes his presence known, they recommit to it.

As Succession season three continues to unfold, pay attention to how often the show’s directors include many of the actors from the show’s considerable ensemble cast lurking in the same shot. These shots are peppered throughout “Mass in Time of War,” and they’re often used to contrast how the different Roy siblings react when Logan is either mentioned or makes his presence known via pastry. Some of them recoil, some of them sit up a little more sharply, some of them just look away. But they’re all reacting, often in very different ways.

Succession is a show about all of the ways that abuse warps entire generations of families. If that wasn’t clear before “Mass in Time of War,” it should be now. Logan Roy doesn’t have to be present to get his children to do his bidding. All he has to do is send a single object, a symbol of his eternal, deeply angry affection. So when that box of doughnuts shows up, it’s like he’s sitting right there.

Will you support Vox’s explanatory journalism?

Millions turn to Vox to understand what’s happening in the news. Our mission has never been more vital than it is in this moment: to empower through understanding. Financial contributions from our readers are a critical part of supporting our resource-intensive work and help us keep our journalism free for all. Please consider making a contribution to Vox today to help us keep our work free for all.