The report from the firm Catalist looks at what changed since 2016, but also at the parties’ coalitions overall. , "Vintage clock with calendar showing 2020 election date" by wuestenigel is licensed under CC BY 2.0

In the days and weeks after presidential election results come in, commentators attempting to figure out what happened with voter demographics are often in a fog — forced to rely on unreliable exit polls. More rigorous analysis simply takes longer.

Now, Catalist, a Democratic data firm, has put out a report on “What Happened in 2020,” authored by Yair Ghitza and Jonathan Robinson, which makes a serious attempt to answer that question. The report is superior to the exit polls because it’s based in their research for what’s known as a “voter file.” Basically, they’ve put together a large database of turnout information about actual voters, assembled from state or local records about who actually showed up.

That information has its limits — it’s a secret ballot, so we don’t know who specific people voted for. But this information can be supplemented with precinct-level vote results, census information, and survey findings. The Catalist authors put all this together to estimate how different demographics voted. Some of their general findings about what changed since 2016:

But the report doesn’t just look at the narrow question of what changed in each group; it helps us understand the two parties’ coalitions as a whole. For instance, it drives home the fact that the non-college white population, while declining as a share of the electorate, remains quite large (they were about 44 percent of all voters in 2020), and Trump won 63 percent of them. And though Biden performed worse among Black voters than Clinton or Obama, he still won about 90 percent of that group.

One note here is that, for the sake of allowing easy year-to-year comparisons, these percentages are calculated by looking only at votes cast for either the Democratic or Republican nominees, rather than for third-party candidates. This is called the two-way vote share — Catalist’s report focused on this metric, so all of this article’s references to demographic vote percentage will use it as well.

Much attention has been paid to the shift of white college-educated voters toward Biden and Latino voters toward Trump in 2020, which makes sense — as a table from Catalist shows, those were particularly dramatic shifts. 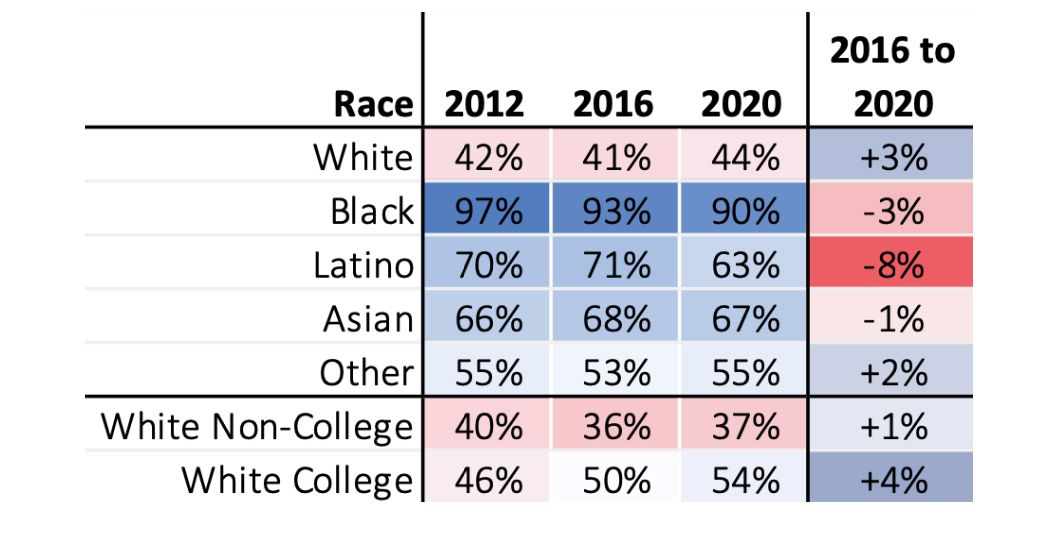 But it’s also worth dwelling on a shift that didn’t happen in 2020 but could have been crucial — it looks like Trump did not continue to gain among white voters without a college degree. According to Catalist’s report, 36 percent of these voters supported Clinton, a 4-point drop from Obama’s performance in 2012. But Democrats did not continue to hemorrhage these voters in 2020 — Biden actually improved slightly, winning 37 percent of them. 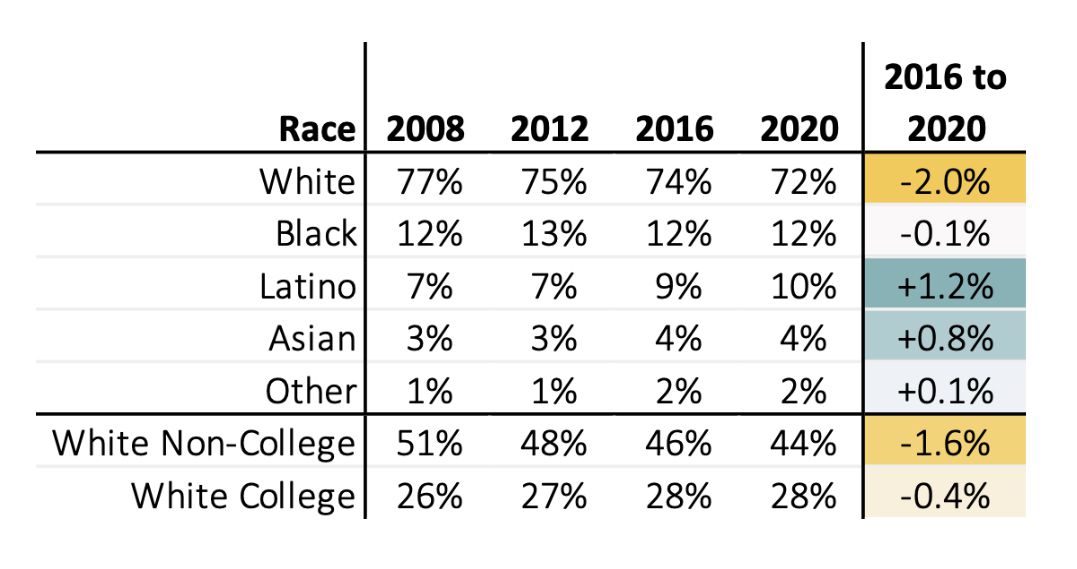 So the fact that Biden avoided Democrats’ recent trend of losing more and more white voters without a college degree was actually quite important in his victory. If he had won, say, 34 percent of them instead of the 37 percent he did win, he very well might not be president right now.

Furthermore, the shorthand of punditry often says Democrats win because of a coalition of nonwhite and college-educated white voters. But the below chart makes the point that non-college whites actually still make up an estimated 32 percent of overall votes cast for Biden. In comparison, Black and Latino voters together also comprised 32 percent of the overall votes for Biden. More than half the Trump coalition, in contrast, is comprised of non-college-educated white voters (and Trump’s coalition is 85 percent white overall).

Simply put, there are a lot of white people in the United States of America, and a lot of them vote. And there’s no reason to just assume that Hillary Clinton’s performance among this group was the floor for how low Democrats can fall. As a comparison, in 2016 Trump’s share of the college-educated white vote dropped 4 points from Romney’s share of it in 2012 — and then, in 2020, it dropped another 4 points. But, per Catalist’s report, Biden averted further declines among non-college whites and slightly improved on Clinton’s performance.

Biden’s worsened performance among Latino voters as compared to past Democratic nominees has been much discussed since the election, and Catalist puts some numbers on just what happened there — the group estimates that Hillary Clinton won 71 percent of Latino voters in 2016, but Biden won 63 percent in 2020. This 8-point drop is the most dramatic shift in a four-year period among the major racial or ethnic groups seen in Catalist’s data.

This comes in the context of a massive increase in Latino turnout overall — while turnout was up across the board, it was particularly up among Latino (and Asian) voters, in what’s just an incredible increase in a four-year period. 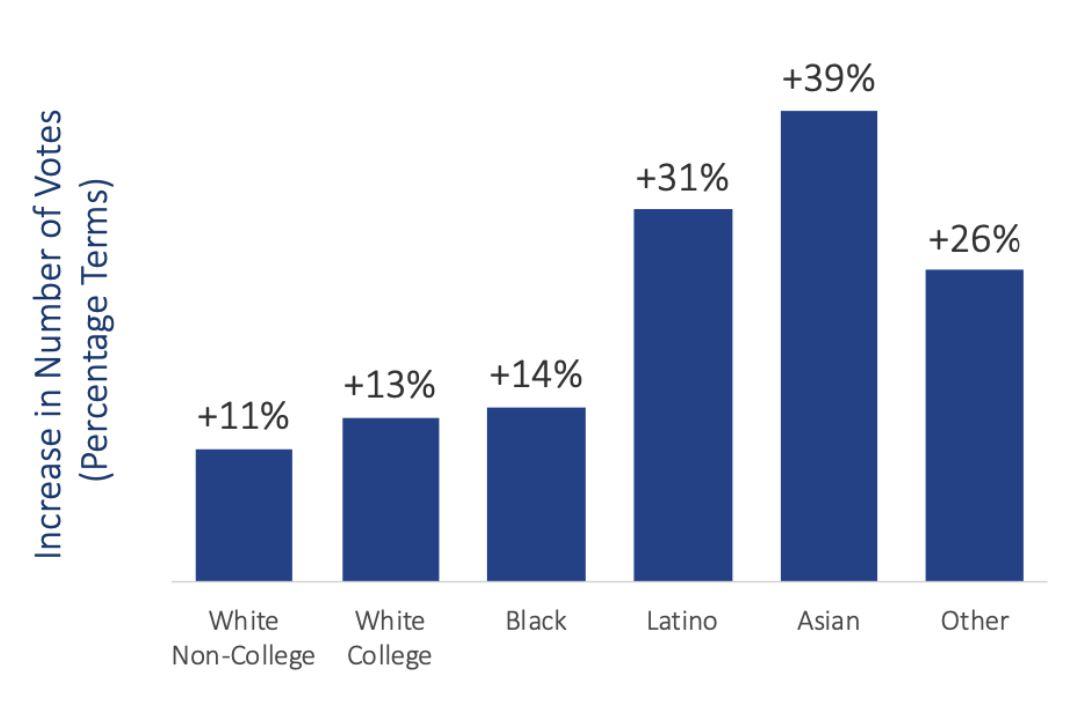 The turnout surge also raises a question — did Trump improve because previously voting Latinos switched from backing Democrats to backing Republicans, or were his gains mainly among new voters? Catalist doesn’t provide a definitive answer, but the authors say, “we see suggestive evidence that both of these factors played some role.”

In contrast to claims that Democrats’ worsening performance with Latinos was mainly concentrated among Cuban Americans in Florida, the report finds that the decline was broader — but that the drops were smaller in key states that Biden barely won, like Arizona and Georgia. 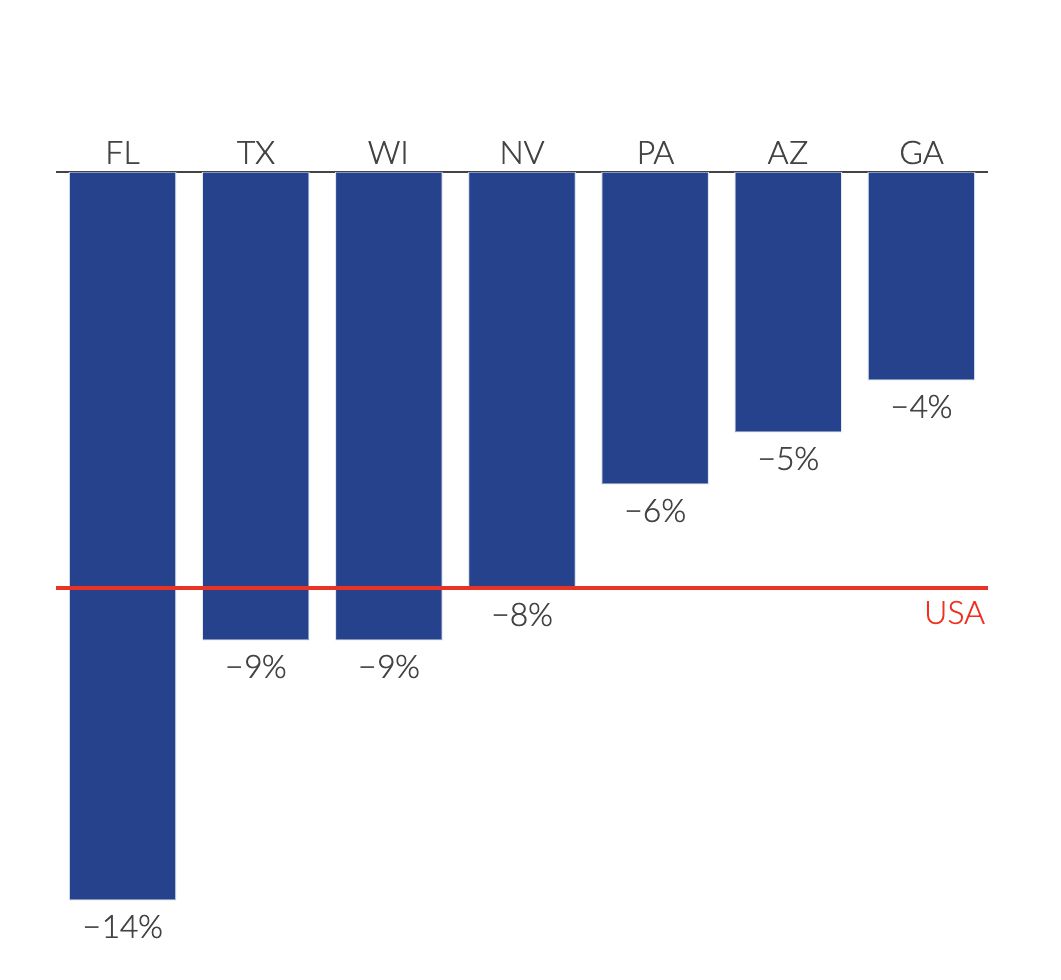 “Mexicans are the largest Latino subgroup in most states across the country, and highly Mexican areas also showed a drop (6 points), albeit smaller than Cuban areas,” the authors write. “Puerto Rican, Dominican, and areas with other dominant groups were in the middle (8-9 point drop), close to the national average” drop among Latinos. 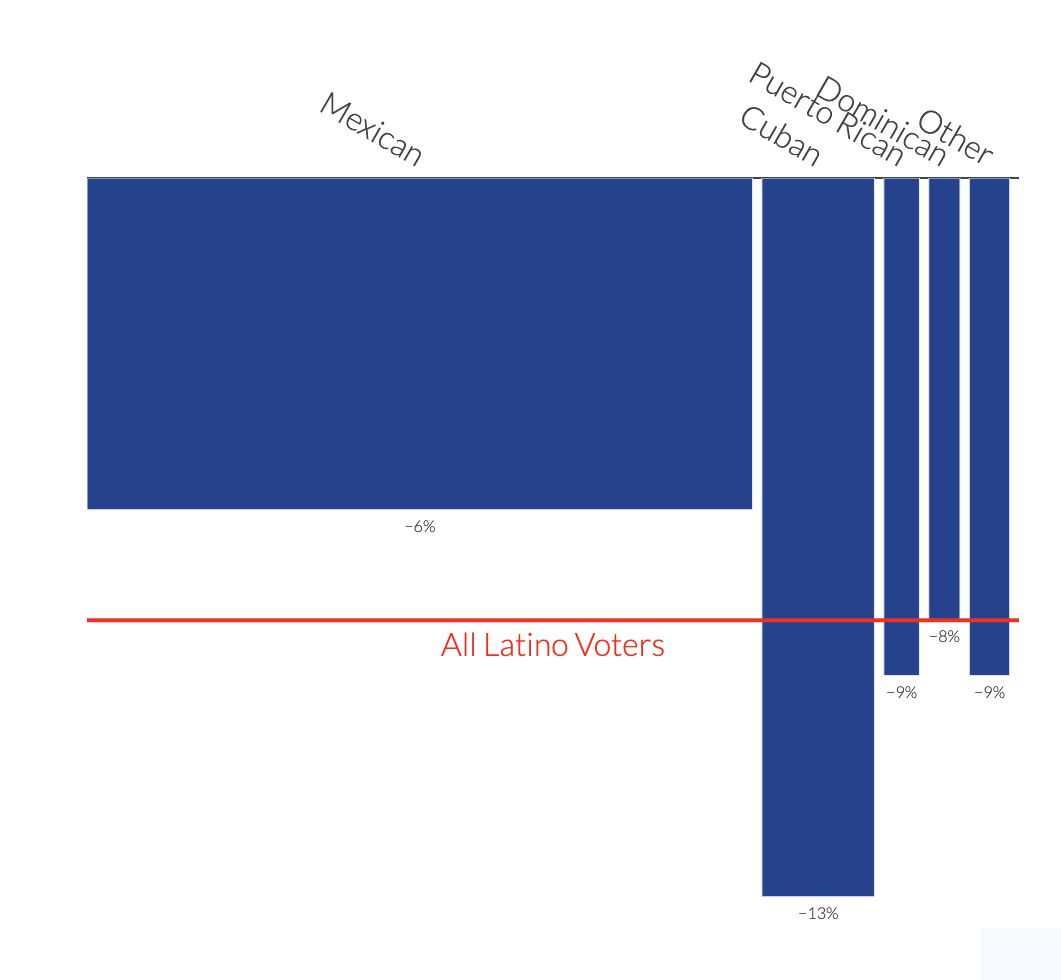 If Democrats don’t find a way to reverse these declines, they’ll have a difficult time competing in Florida and Texas. But if this becomes a longer-term trend it could also imperil the party’s recent strength in Nevada and their very recent gains in Arizona.

Black voters’ support is crucial for Democrats — is it dropping?

The authors make that point that despite this drop, “Black voters are key to Democratic success” — without the large majorities of Black voters Biden won, he couldn’t have been competitive nationally or in key Electoral College states like Georgia, Pennsylvania, or Michigan.

So how does Joe Biden win if he barely improves on Clinton’s performance among non-college-educated white voters and does worse than she did among Black, Latino, and Asian voters?

It’s because of those gains among white voters with a college degree — where he built on and expanded the improvement Clinton had made. In 2012, Obama won an estimated 46 percent of these voters, in 2016 Clinton won 50 percent of them, and in 2020, Biden won 54 percent of them.

White college-educated voters made up about 28 percent of the electorate in 2020 — about as much as all nonwhite voters combined. So winning college-educated whites by 54 to 46 percent matters a great deal.

“The dominant takeaway, from our data and others, is that white college graduates and white suburban voters have turned solidly against Donald Trump’s Republican party,” the authors write.

This is true as far as the trend goes, and it’s one of the most important factors explaining why Biden won and Clinton didn’t. However, it’s also important to stress that 46 percent of college-educated whites still did vote for Trump. Democrats don’t exactly dominate among this group just yet, and it remains to be seen whether their gains here will prove durable.

One overall takeaway from the report, though, is that an electoral majority is often a fragile thing these days. Lose a few points among a few groups and it could slip from your grasp. And some apparent trends continue from one election to the next — while others can surprisingly reverse themselves.

If you value Vox, we have an ask

To understand the news, you have to understand the systems that shape society. Our reporters and editors spend hours finding data, doing research, and talking to experts to clearly explain these systems, including historical context, problems, and potential solutions. Our aim is to give people clear information that empowers them to shape the world in which they live. Please consider making a contribution to Vox today, from as little as $3, to help us keep our work free for all.