US Capitol Protesters, Egged on by Trump, Are Part of a Long History of White Supremacists Hearing Politicians’ Words as Encouragement The Proud Boys outside the U.S. Capitol in Washington, D.C., on Wednesday, January 6, 2021., (Amanda Andrade-Rhoades/For The Washington Post via Getty Images

At a rally that morning, Donald Trump had urged those supporters to march on the Capitol, saying he would “never concede” and that they should show “the kind of pride and boldness that they need to take back our country.”

The Times was joined in laying the blame at Trump’s feet by many others, including Republican Sen. Mitt Romney, who said what happened at the Capitol was “an insurrection incited by the president of the United States.”

Among the protesters at the Capitol were members of white supremacy groups, including the Proud Boys. Their participation in the Jan. 6 events, egged on by Trump, reflects a long history in the U.S. of local, state and national political leaders encouraging white supremacist groups to challenge or overthrow democratic governments.

During Reconstruction, the post-Civil War period of forming interracial governments and reintegrating former Confederate states into the Union, white city and state leaders in the South tacitly encouraged violence against black voters by state militias and groups like the Ku Klux Klan. They did it in a way that allowed those leaders to look innocent of any crimes.

Those groups used that chaos to end federal power in their states and reestablish white-dominated Southern state governments.

Today, white supremacists hope the political chaos they contribute to will lead to race war and the creation of their own white nation. 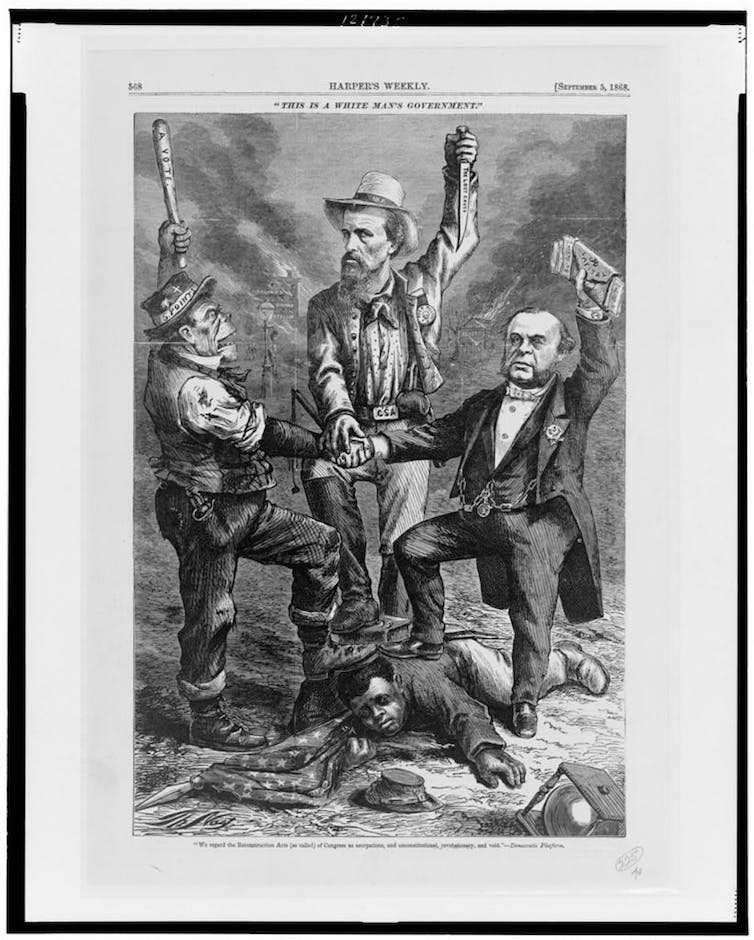 Moments of changing social and political power in U.S. history have led to clashes – often armed – between white supremacists and interracial alliances over voting rights.

That history includes the period following the Civil War, when white supremacist organizations saw the postwar rule over Southern states of Radical Republicans and the federal government as illegitimate. They wanted to return to the prewar status quo of slavery by another name and white supremacist rule.

As a historian of protests and Reconstruction, I study how those paramilitary groups or self-proclaimed “regulators” consequently spread fear and terror among black and white Republican voters with the support of the anti-black Democratic Party in Southern states.

They targeted elections and vowed to “carry the election peaceably if we can, forcibly if we must.”

Still, many courageous black and white voters fought back by forming political organizations, daring to vote and assembling their own armed guards to protect themselves. 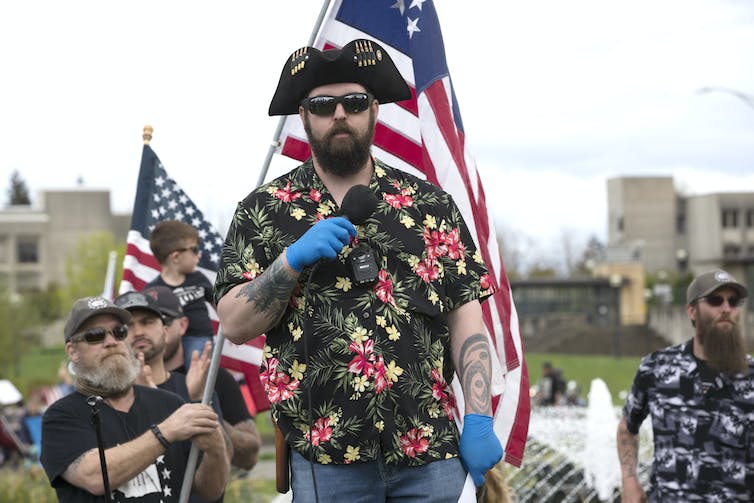 ‘Gentlemen of property and standing’

Federal investigators in Kentucky in 1867 found that “many men of wealth and position” rode with the armed groups. One witness in the federal investigation testified that “many of the most respectable men in the county belong in the ‘Lynch’ party.” Future South Carolina Governor and U.S. Senator “Pitchfork” Ben Tillman reflected on his participation in the Hamburg massacre of 1876, arguing that “the leading men” of the area wanted to teach black voters a lesson by “having the whites demonstrate their superiority by killing as many as was justifiable.” At least six black men were killed in the Hamburg attack on the black South Carolina militia by the Red Shirts, a white rifle club.

White supremacists knew that they would not face consequences for their violence.

An agent of the federal Freedmen’s Bureau – set up by Congress in 1865 to help former slaves and poor whites in the South – stated that the “desperadoes” received encouragement and were “screened from the hands of justice by citizens of boasted connections.”

President Ulysses S. Grant condemned the Hamburg massacre, arguing that some claimed “the right to kill negroes and Republicans without fear of punishment and without loss of caste or reputation.”

Facing community pressure, and without the presence of the U.S. Army to enforce laws, local sheriffs and judges refused or were unable to enforce federal laws.

Armed rioters shown in the aftermath of the multiracial Wilmington, North Carolina, government being overthrown by white supremacists in 1898. Library of Congress

Witnesses were often afraid to challenge local leaders for fear of attack. The “reign of terror” was so complete that “men dare not report outrages and appear as witnesses.”

When the U.S. District Court in Kentucky brought charges against two men for lynching in 1871, prosecutors could not find witnesses willing to testify against the accused. The Frankfort Commonwealth newspaper wrote, “He would be hung by a [mob] inside of twenty-four hours, and the dominant sentiment … would say ‘served him right.’”

As Southern states threw off federal military occupation and elected their own white-dominated governments, they no longer had to rely solely on white terror organizations to enforce their agenda.

Instead, these self-described “redeemers” formed state-funded militias that served similar functions of intimidation and voter suppression with the support of prominent citizens.

At political rallies and elections throughout the South, official Democratic militias paraded through towns and monitored polling stations to threaten black and white Republican voters, proclaiming that “this is our country and we intend to protect it or die.”

In 1870 the Louisville Commercial newspaper argued, “We have, then, a militia for the State of Kentucky composed of members of one political party, and designed solely to operate against members of another political party. These militia are armed with State guns, are equipped from the State arsenal, and to a man are the enemies of the national government.”

White militias and paramilitary groups also confiscated guns from black citizens who tried to protect themselves, claiming “We did not think they had a right to have guns.” 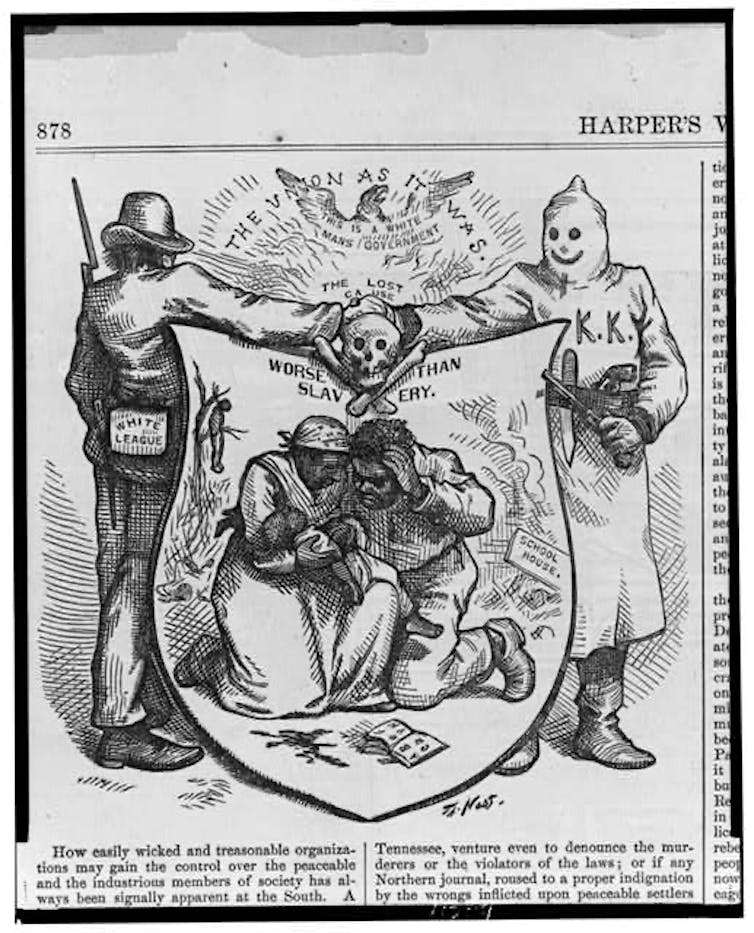 In an 1874 Harper’s Weekly cartoon, ‘The Union as it was,’ Thomas Nast critiques violent white supremacist organizations for forcing African Americans into a position ‘worse than slavery.’ Library of Congress/Thomas Nast from Harpers Weekly

During Reconstruction, paramilitary groups and official Democratic militias found support from county sheriffs up to state governors who encouraged violence while maintaining their own innocence.

Today, white supremacists appear to interpret politicians’ remarks as support for their cause of a new civil war to create a white-dominated government.

These groups thrive on recent protests against stay-at-home orders, especially the ones featuring protesters with guns, creating an intimidating spectacle for those who support local and state government authority.

Beyond “dog whistle” politics, as in the past, these statements – and the actions encouraged by them – can lead to real violence and hate crimes against any who threaten supremacists’ concept of a white nation.

Editor’s note: This is an updated version of an article originally published May 18, 2020.

[You need to understand the coronavirus pandemic, and we can help. Read The Conversation’s newsletter.]

The Conversation is a nonprofit organization, and we depend on readers like you to help us do our important work of sharing ideas and knowledge from academia with the public. Your support keeps us going strong. Your donation will help us reach more people with more research-based journalism. Thank you.