One World or No World. Choose! The emergence of yet another COVID variant as well as a surge of new infections and restrictions have people wondering if this pandemic will ever end.

We’ve known how to stop infectious disease transmission for over a century. The problem is that our profit-driven society is structured to a) promote the spread of infectious diseases and b) block effective measures to stop them.

Consider the scale of the problem. COVID-19 spread so quickly around the globe because capitalism is an international economic system.

Capitalists roam the globe to find the most favorable conditions for making profit and extracting capital. Computer components may be resourced in one country, manufactured in another country, assembled in a third, sold in a fourth, and serviced in a fifth. The entire process is coordinated through a ‘global supply chain’ that links resource extraction, manufacture, transportation, and distribution across the world. It also serves as a transmission belt for infectious disease.

“The tracking map from Johns Hopkins Coronavirus Resource Center, showing the concentrations of infection in the US, mirrors similar maps from the Brookings Institution’s studies of concentrations of manufacturing, transportation hubs, and warehousing. This is yet another indication that this virus has moved through the circuits of capital and the humans that labour in them, and not solely by random ‘community’ transmission.” 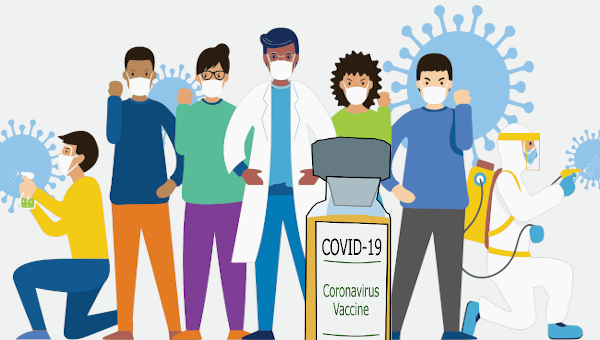 The spread of disease through the chain of production could be stopped by making worker health and safety a priority. However, this cannot happen under capitalist rule because the conditions that favor disease are also the most profitable: low wages, long hours, demanding work, short-staffing, crowded conditions, poor ventilation, exposure to toxins, lack of sanitation, and so on.

The more employers spend on worker health and safety, the less profit they make. To maximize profits, they treat workers as disposable and replaceable, to the point of denying or minimizing COVID outbreaks in major industries, from meat-packing and warehousing to medicine and retail.

Governments allow unsafe work because their role is to support the ruling class. The US Occupational Safety and Health Administration (OSHA) refused to issue an enforceable emergency standard to protect workers from COVID-19. As workplace complaints soared, the number of safety inspections plummeted.

Capitalist priorities have structured disease into the chain of production, where it spreads to the rest of society. Because this cannot be admitted, failure to end the pandemic is wrongly blamed on the unvaccinated, travelers, irresponsible individuals, and even the virus itself.

COVID-19 found fertile ground in a capitalist economy based on ‘lean production’, where the goal is to eliminate every unused second, unproductive action, unprofitable process, and non-productive worker. While highly profitable, this stripped-to-the-bone system has no built-in reserve to absorb the shock of a crisis.

“For goods to move seamlessly from overseas factories to American addresses, the ocean going vessels, shipping containers, cargo terminals, truckers, chassis providers, and railroads all must work together, like runners in a relay race.”

Producing everything on demand over large distances assumes a stable environment. When COVID emerged, the entire system was plunged into crisis as essential workers sickened and died. Chronically short-staffed medical systems were overwhelmed, sending death rates soaring. Nearly one in four COVID-19 deaths in the US were attributed to hospital overload.

In 2020, more than 28 million excess years of life had been lost in 31 countries. To date, almost 6 million have died, a pandemic holocaust with no end in sight.

Collapse of the Global Chain of Production

COVID provoked a huge spike in demand for personal protective equipment, ventilators, oxygen, and other medical necessities. This demand could not be met because such items had not been stored and, therefore, had to be newly manufactured. However, COVID had disrupted the global chain of production.

Wealthier nations saw a massive shift in consumer demand, from in-person shopping to online ordering, from traveling to staying at home, from eating out to ordering in. What was needed yesterday was no longer needed, and what was needed today was not available. The resulting scarcity pushed prices higher. Factories that closed, even temporarily, created more bottlenecks. The global chain of production began to collapse like a long line of toppling dominoes.

“Ships wait off the California coast, unable to unload their cargo. Truckers are overworked and overwhelmed, often confronting logjams. Rail yards have also been clogged, with trains at one point backed up 25 miles outside a key Chicago facility… The commercial pipeline that each year brings $1-trillion worth of toys, clothing, electronics, and furniture from Asia to the United States is clogged, and no one knows how to unclog it.”

As one trucker put it,

“For the whole supply chain to function efficiently, every point has to be working at an equal capacity. Right now, it’s ALL failing spectacularly TOGETHER, but fixing one piece won’t do anything. It ALL needs to be fixed, and at the same time.”

The basic problem is two-fold: production for profit conflicts with human need; and economic integration is not paired with social integration.

Although the world economy is globally integrated, it operates within a social system of competing nation states, each striving to advance its own national interests. National rivalry makes it impossible to solve global problems, including stopping pandemics and repairing the global chain of production.

The nation state is a recent creation of capitalism. People in feudal societies lived and worked in a multitude of small fiefdoms, each with their own rulers, languages, and customs. As capitalism developed, this patchwork of economies formed a barrier to trade and commerce. The capitalist revolutions of the 19th century reorganized this hodgepodge into the modern system of nation states. Now this system is blocking our ability to solve the basic problems of survival.

Because there is no slack or resilience in the system, individuals are expected to adapt, to demonstrate personal resilience or ‘grit’ by working insane hours, homeschooling their children, and suffering social isolation, income loss, and death on a mass scale. Those who break down under the strain are labeled weak or mentally ill.

“Google ‘resilience’ and you’ll have more listicles and books offering you three, five, or seven steps to make yourself more resilient than you could ever muster the resilience to read. No one doubts that determination and toughness are worthwhile character traits, but a problem arises when we build our political system around the need to endure hardship.”

The emphasis on individual resilience is based on the belief that society will never change, so people must adapt to hardship and roll with the punches instead of organizing to stop them.

Individual measures cannot solve global problems. Most people know this. In every nation, they beg authorities to ‘follow the science’ and do what is needed to protect against pandemics, climate change, and other existential crises. They plead in vain.

The 2021 Global Health Security Index found that all countries, regardless of income levels, remain dangerously unprepared for future pandemics. Such failure is inevitable in a system that treats preparing for crises and preventing hardship as unprofitable, and therefore, not worth doing.

We can keep banging our heads against the wall of capitalist intransigence, or we can face reality; the only way to solve our problems is to replace capitalist rule with a globally cooperative, worker-run society.

Our rulers have no solutions. The 2021 film, Don’t Look Up explains why. A planet-killing comet is on a collision course with Earth, and the scientists who discovered this can get no hearing. The people in power simply refuse to accept the situation. When they finally move to act, their greed sabotages the one chance of saving Earth. In typical Hollywood fashion, ordinary people are miscast as an easily panicked mob incapable of solving such problems and thus, the world is destroyed.

This movie reflects what many people believe, that there is no way out of the mess we are in. However, the movie title has a double meaning; it is useless to ‘look up’ to authorities to solve our problems.

The real solution is on the ground, all around us, in the minds and hands of the ordinary people who make everything possible.

There is only one truly international class: the billions of workers organically connected through the global chain of production. Building class solidarity along this chain could transform it into a global chain of cooperation – the basis for a socially integrated and socially responsible economy.

Instead of producing capital for their exploiters, workers could be producing what people need, in ways that protect their own health and the health of their environment.

Building class solidarity means actively opposing racism, sexism, nationalism, patriotism, war, and every other measure that pits workers against each other.

This article first published on the Susan Rosenthal website.

Susan Rosenthal is the author of The Social Sources of Sickness: What I Learned From 50 Years in Medicine, and maintains a blog at susanrosenthal.com.

The Bullet is an online publishing venue for the socialist Left in Canada and around the world. It solicits, publishes and republishes articles that advance socialist ideas and analysis of important events, topics and issues. It publishes articles by socialist thinkers and activists, movement builders and organizers, workers and trade unionists, and all those seeking to go beyond capitalism.

The Bullet is produced by the SP [Socialist Project], but its editorial collective publishes articles that reflect a plurality of voices on the broad socialist Left–some are SP members, and others are not. The Bullet is a choice publishing venue for Left writers in Canada and worldwide. To subscribe to The Bullet, click here. To write for it, click here.