The Supreme Court handed down an order Tuesday evening that makes no sense.

It is not at all clear what the Biden administration is supposed to do in order to comply with the Court’s decision in Biden v. Texas. That decision suggests that the Department of Homeland Security committed some legal violation when it rescinded a Trump-era immigration policy, but it does not identify what that violation is. And it forces the administration to engage in sensitive negotiations with at least one foreign government without specifying what it needs to secure in those negotiations.

One of the most foundational principles of court decisions involving foreign policy is that judges should be extraordinarily reluctant to mess around with foreign affairs. The decision in Texas defies this principle, fundamentally reshaping the balance of power between judges and elected officials in the process.

The central issue in Texas is the Biden administration’s decision to terminate former President Donald Trump’s “Remain in Mexico” policy, which required many asylum seekers arriving at the United States’ southern border to stay in Mexico while they awaited a hearing on their asylum claim. Although the policy was formally ended under Biden, it hasn’t been in effect since March 2020, when the federal government imposed heightened restrictions on border crossings due to Covid-19.

Technically, this case is still on appeal. The Biden administration requested a stay of Kacsmaryk’s order while its appeal is pending. But the administration is now under an immediate obligation to comply with that order.

And the Supreme Court’s decision to deny the stay bodes very ill for the ultimate outcome of that appeal. The Court did not disclose every justice’s vote, but liberal Justices Stephen Breyer, Sonia Sotomayor, and Elena Kagan did disclose that they dissent.

Kacsmaryk’s opinion, it should be noted, was dead wrong. It effectively claimed that a 1996 law required the federal government to implement the Remain in Mexico policy permanently. That policy didn’t even exist until 2019, so the upshot of Kacsmaryk’s opinion is that the government violated the law for nearly a quarter-century and no one noticed.

The Supreme Court does not go that far. Instead, it suggests that the Biden administration did not adequately explain why it chose to end the Remain in Mexico policy. In theory, that’s a solvable problem. Secretary of Homeland Security Alejandro Mayorkas could comply with the Supreme Court’s decision by issuing a new memo providing a more fleshed-out explanation.

Except that the Supreme Court does not even offer a hint as to why it deemed the Biden administration’s original explanation insufficient. Here is the entire text of the Court’s order: 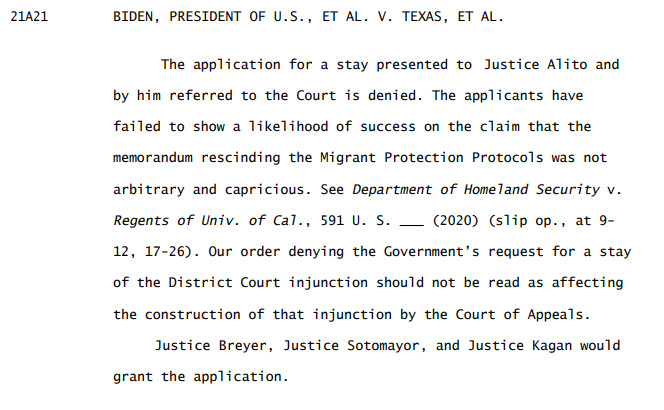 And so, without an explanation as to how it could comply with the conservative justices’ understanding of the law, the administration is left with two untenable choices. The first is that it can try to guess what, exactly, the justices want them to say in a new memo explaining its policy. The second is to make what could be a futile effort to reinstate Trump’s policy.

It should go without saying that Mexico is likely to have strong opinions about this abrupt policy shift. The original Remain in Mexico policy came about only after the United States secured Mexico’s cooperation, and it is unlikely that the United States could successfully reimplement this policy without Mexico’s permission.

So one of the upshots of the Supreme Court’s order is that the administration must now go, hat in hand, to the Mexican government and beg them to cooperate again.

For decades, the Supreme Court warned the judiciary to avoid “unwarranted judicial interference in the conduct of foreign policy.” Judges, the Court explained in Kiobel v. Royal Dutch Petroleum Co. (2013), should be “particularly wary of impinging on the discretion of the Legislative and Executive Branches in managing foreign affairs.”

Apparently that’s all out the window now: Unless the Biden administration can figure out what it needs to put in a new memo explaining its policy, it must reopen diplomatic negotiations with Mexico (and possibly with Central American nations whose citizens are seeking asylum in the United States) in order to reinstate a policy that it does not agree with, and that it believes, in Mayorkas’s words, will leave untold numbers of immigrants without “stable access to housing, income, and safety.”

The one mitigating factor is that the Court also left in place an appeals court decision holding that the administration will not violate the court order against it so long as it tries in “good faith” to reinstate the Trump-era policy. But this “good faith” requirement raises more questions than it answers.

As the Court held in Schmidt v. Lessard (1974), because “an injunctive order prohibits conduct under threat of judicial punishment, basic fairness requires that those enjoined receive explicit notice of precisely what conduct is outlawed.” But the court order against the Biden administration doesn’t provide any such notice.

With this order, Republican-appointed judges are claiming the power to direct US foreign policy — and don’t even feel obligated to explain themselves.

Ian Millhiser is a senior correspondent at Vox, where he focuses on the Supreme Court, the Constitution, and the decline of liberal democracy in the United States. Before joining Vox, Ian was a columnist at ThinkProgress. Among other things, he clerked for Judge Eric L. Clay of the United States Court of Appeals for the Sixth Circuit and served as a Teach For America corps member in the Mississippi Delta.