G.O.P. Bills Target Protesters (and Absolve Motorists Who Hit Them)

As the nation reacts to the guilty verdict a jury handed to Derek Chauvin in the killing of George Floyd, Republican-led states are introducing punitive new measures governing protests. Demonstrators marched through downtown Minneapolis on Monday as jury deliberations started in the trial of Derek Chauvin for the murder of George Floyd., Victor J. Blue for The New York Times

Republican legislators in Oklahoma and Iowa have passed bills granting immunity to drivers whose vehicles strike and injure protesters in public streets.

The measures are part of a wave of new anti-protest legislation, sponsored and supported by Republicans, in the 11 months since Black Lives Matter protests swept the country following the death of George Floyd. The Minneapolis police officer who killed Mr. Floyd, Derek Chauvin, was convicted on Tuesday on murder and manslaughter charges, a cathartic end to weeks of tension.

But while Democrats seized on Mr. Floyd’s death last May to highlight racism in policing and other forms of social injustice, Republicans responded to a summer of protests by proposing a raft of punitive new measures governing the right to lawfully assemble. G.O.P. lawmakers in 34 states have introduced 81 anti-protest bills during the 2021 legislative session — more than twice as many proposals as in any other year, according to Elly Page, a senior legal adviser at the International Center for Not-for-Profit Law, which tracks legislation limiting the right to protest.

Some, like Mr. DeSantis, are labeling them “anti-riot” bills, conflating the right to peaceful protest with the rioting and looting that sometimes resulted from such protests. 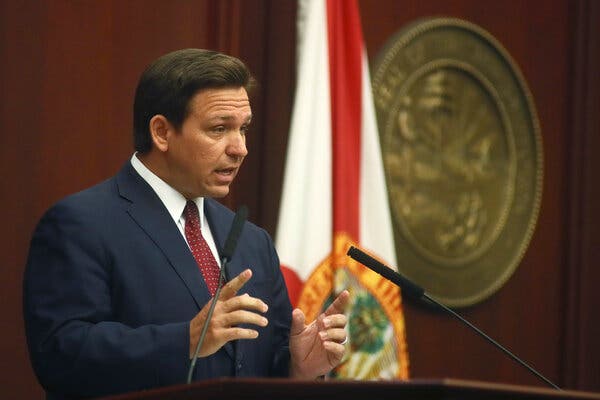 Gov. Ron DeSantis of Florida has used the term “anti-riot” bills for legislation that limits the right to protest.  Credit...Phil Sears/Associated Press

The laws carry forward the hyperbolic message Republicans have been pushing in the 11 months since Black Lives Matter protests against racial injustice swept the country: that Democrats are tolerant of violent and criminal actions from those who protest against racial injustice. And the legislation underscores the extent to which support for law enforcement personnel and opposition to protests have become part of the bedrock of G.O.P. orthodoxy and a likely pillar of the platform the party will take into next year’s midterms.

“This is consistent with the general trend of legislators’ responding to powerful and persuasive protests by seeking to silence them rather than engaging with the message of the protests,” said Vera Eidelman, a lawyer at the American Civil Liberties Union. “If anything, the lesson from the last year, and decades, is not that we need to give more tools to police and prosecutors, it’s that they abuse the tools they already have.”

Most of the protests held across Florida last summer were also peaceful, though a few in Miami, Tampa and Jacksonville produced some episodes of violence, including the burning of a police car and a sporting goods store. Still, as they embraced the bill that Mr. DeSantis signed into law, Republican leaders expressed scorn for cities that trim police budgets and tolerate protesters who disrupt business and traffic. 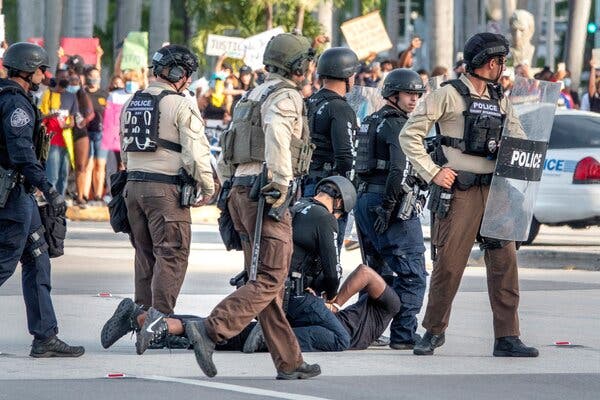 Police officers making an arrest during protests in Miami last year over the death of George Floyd. Credit...Cristobal Herrera/EPA, via Shutterstock

The Florida law imposes harsher penalties for existing public disorder crimes, turning misdemeanor offenses into felonies, creating new felony offenses and preventing defendants from being released on bail until they have appeared before a judge. A survey conducted in January by Ryan D. Tyson, a Republican pollster, found broad support in the state for harsher penalties against protesters “who damage personal and business property or assault law enforcement.”

But the law goes farther. If a local government chooses to decrease its law enforcement budget — to “defund the police,” as Mr. DeSantis put it — the measure provides a new mechanism for a prosecutor or a city or county commissioner to appeal the reduction to the state.

The law also increases penalties for taking down monuments, including Confederate ones, making the offense a second-degree felony punishable by up to 15 years in prison. It makes it easier for anyone who injures a protester, such as by driving into a crowd, to escape civil liability.

State Senator Shevrin D. Jones, a Democrat from Broward County and a vocal critic of the law, noted that Mr. DeSantis had been quick to emphasize how necessary the bill was the day after the deadly Jan. 6 riot at the U.S. Capitol but had made no mention of that event during Monday’s bill signing, focusing solely on the summer protests.

That was evidence, he said, that bills aimed at punishing protesters were disproportionately targeting people of color. “This bill is racist at its core,” Mr. Jones said.

So far, three bills aimed at limiting protests have been signed into law — Florida’s and new laws in Arkansas and Kansas that target protesters who seek to disrupt oil pipelines. Others are likely to come soon.

In Oklahoma, Republican lawmakers last week sent legislation to Gov. Kevin Stitt that would criminalize the unlawful blocking of a public street and grant immunity to drivers who strike and injure protesters during a riot. Last June, a pickup truck carrying a horse trailer drove through a crowd of Black Lives Matter protesters on a Tulsa freeway, injuring several people and leaving one paralyzed. The driver, who said he had sped up because he feared for the safety of his family, was not charged.

The bill’s author, State Senator Rob Standridge, said the Tulsa incident had prompted him to seek immunity for drivers who strike protesters. He said Tuesday he wasn’t aware of any drivers who had been charged after striking protesters in Oklahoma. “My hope is that this law never is utilized,” he said in an interview. Carly Atchison, a spokeswoman for Mr. Stitt, declined to say whether he would sign the bill, which passed with veto-proof majorities.

Tiffany Crutcher, whose twin brother, Terence Crutcher, was shot and killed in 2016 by a Tulsa police officer who was later acquitted on a manslaughter charge, said the Oklahoma proposal represents Republican efforts to extend the Trump administration’s hostility toward people of color.

Dr. Crutcher said she was convinced that if Mr. Stitt signed the legislation, it would be applied in harsher terms against those protesting racial injustice than for white protesters demonstrating for gun rights or against abortion.

“We all know that over the last four years that we saw white supremacy, bigotry and racism show its ugly head in so many forms,” said Dr. Crutcher, who quit her job as a physical therapist to work for racial justice after the death of her brother. “This is the continuation of the Trump administration that showed us every day that Black lives didn’t matter.”

While Republican lawmakers present the anti-protest legislation as support for the police, law enforcement agencies don’t necessarily back the new proposals. 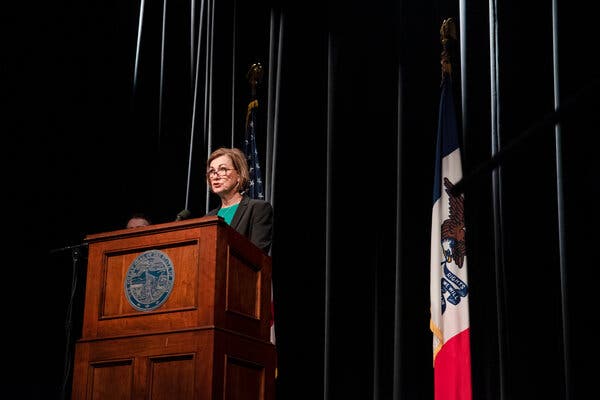 The Iowa bills, part of a law enforcement package proposed by Gov. Kim Reynolds, would strip local governments of state funding if cities and counties defund their own law enforcement budgets — something that no Iowa jurisdiction has sought to do. And state lawmakers cut a proposal by Ms. Reynolds to track police-stop data by race.

The state’s police departments didn’t ask for new tools to crack down on protesters or grant immunity to drivers who strike protesters marching in streets, said Kellie Paschke, a lobbyist for the Iowa Peace Officers Association, an umbrella group for the police.

In Kentucky, where protests following the police killing of Breonna Taylor lasted for months last year, the State Senate passed a bill that would make it a crime to insult or taunt a police officer with “offensive or derisive” words or gestures that would have “a direct tendency to provoke a violent response.” The measure would have required that those arrested on such a charge be held in jail for at least 48 hours — a provision that does not automatically apply to those arrested on murder, rape or arson charges in Kentucky.

Though the legislation died in the statehouse over bipartisan concerns about free speech, the bill’s lead sponsor, State Senator Danny Carroll, a Republican who is a retired police officer, said he planned to refile it next session. Mr. Carroll said the bill was needed to ensure community safety and protect law enforcement personnel.

“They are under attack constantly,” he said, noting that police officers decades ago could “arrest someone for cussing them out,” until court rulings curtailed such police powers.

In the hours after Mr. DeSantis signed the Florida bill on Monday, as the nation awaited the Chauvin verdict, progressive community organizers in the state worried about how law enforcement agencies might react to any protests that resulted from the decision. Moné Holder, senior director of advocacy and programs for Florida Rising, a social justice organization, said her team had spent a lot of time informing activists of their rights under their new law.

“It’s a tactic to silence our voices,” she said.

After the verdict was announced, she remained concerned about how the police would deal with community members if they chose to gather outside, to be together after an emotional year.

“To console each other, to cry, to grieve,” she said. “The fact that we have to think twice about that is troublesome.”