film Netflix’s The White Tiger Takes On Slumdog Millionaire, But It Doesn’t Stop There

Based on the bestselling novel, Netflix’s The White Tiger is a wry, blistering critique of inequality in India — and elsewhere. Comparisons between Netflix’s The White Tiger and Danny Boyle’s Oscar-winning 2008 film Slumdog Millionaire were always going to be inevitable — poor boy in India makes good, becomes rich — but lest you miss the similarities, The White Tiger makes sure you can’t. Speaking of the poverty into which he was born, our narrator Balram Halwai (Adarsh Gourav) pointedly rebuffs the earlier story for us, the movie’s viewers. “Don’t think for a second there’s a million-rupee game show you can win to get out,” he says. Later, he explains further: “For the poor, there are only two ways to get to the top: crime or politics.”

But then he hurls the all-important, innocent-sounding question: “Is it that way in your country too?”

Adapted from the Booker Prize-winning 2008 novel by Aravind Adiga, The White Tiger is a funny and ferocious dip into India’s caste system and, more broadly, the cultural mechanisms that keep the poor in their place. Inequality and class conflicts are themes that have always echoed across world cinema. But there’s been a crescendo in the past few years, spanning the globe from Senegal (Atlantics) to Spain (The Platform), Brazil (Bacurau) to Korea (Parasite), the United Kingdom (Sorry We Missed You) to the United States (Sorry to Bother You).

Like those films, The White Tiger takes a twofold approach to exploring inequality: It taps into the broader, well-established systems in India that make it extraordinarily difficult to move between social classes. And it does so by zeroing in on one man’s life, the people he encounters, and his realizations about what it takes to vault the barrier. As he says: crime or politics.

Balram (Adarsh Gourav) is a smart kid born to a very poor family in one of India’s lower castes. A teacher tells him one day that he’s the “white tiger” — according to lore, there is only one white tiger born in every generation, so this means Balram is special, unique, and destined for great things.

But that seems improbable. Balram isn’t going anywhere. He tells us that really, there are only two castes in India — the people who have things and the people who don’t. He doesn’t. In his family, you are born, you live, and you die as a member of the servant class. You have little access to education and opportunity. And you’re likely to believe that’s all you can ever be.

One day, Balram (now a young man) spots the son of a wealthy family getting out of his fancy car, and suddenly realizes that all he wants in life is to work for this stylish, handsome, confident gentleman. He is Ashok (Rajkummar Rav), whose family keeps the government tax man off their back by paying off officials. Ashok has been living in the US, but he’s returned to India to join the family business, bringing his wife Pinky (Priyanka Chopra Jonas) along with him. 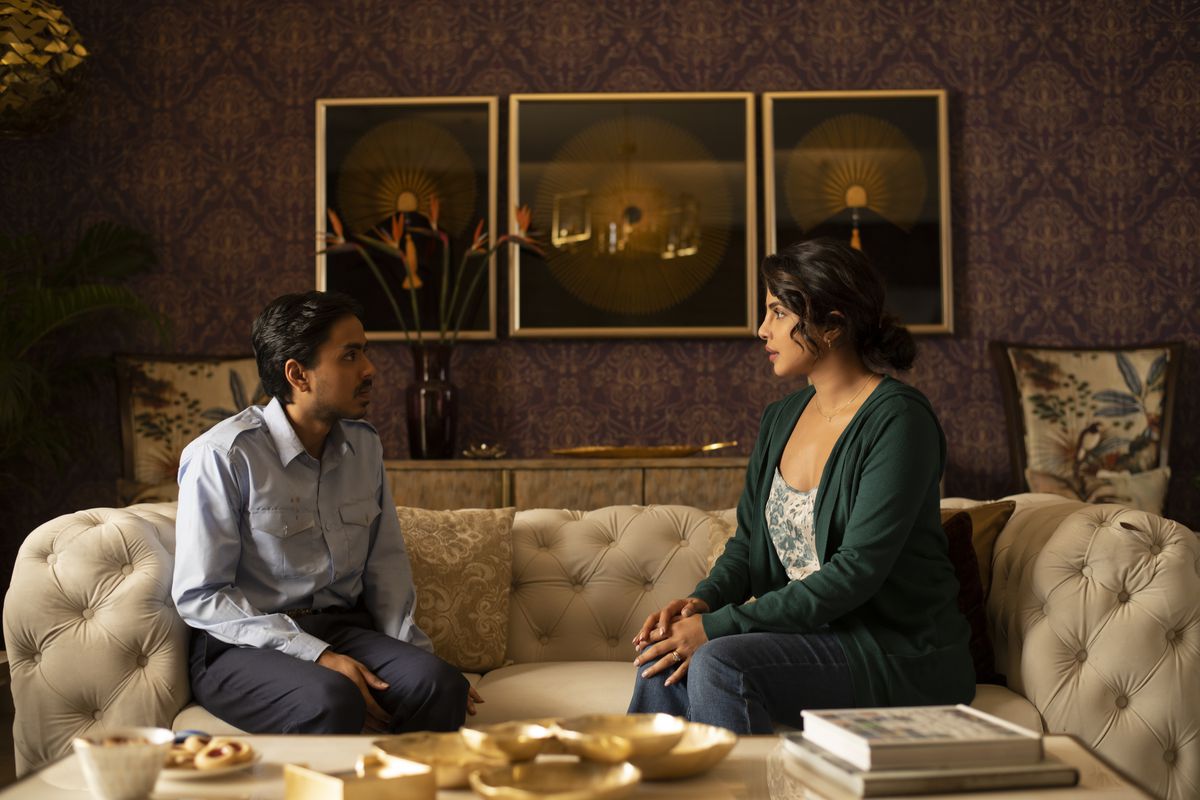 Adarsh Gourav and Priyanka Chopra in The White Tiger.

Balram begs enough money from his grandmother to take driving lessons, then manages to claw his way into a job as the family’s second driver, mostly chauffeuring Ashok and Pinky. Ashok, who grew up in India, is accustomed to treating Balram with a kind of benevolent dismissal, as an expendable servant. Ashok isn’t abusive or cruel; he just doesn’t think about Balram unless he needs to.

Pinky, in contrast, is kind to Balram. She moved to the US when she was 12 and grew up in Queens, where her parents run a convenience store. She tries to tell Balram to dream bigger than being a servant. And Balram, who has always quietly dreamed of something bigger, feels a tug of war inside himself. He begins to hope that his relationship with Ashok may lead him toward something better.

Then something terrible happens, and Balram discovers that, to the family, he is still expendable. If he wants to rise above his social station, he’s going to have to do it through other means.

And those means won’t be “a million-rupee game show you can win to get out.” The White Tiger wants to counteract stories like Slumdog Millionaire, in which a poor kid gets very lucky. Those kinds of narratives, this movie makes clear, represent an attractive fantasy to white Americans, not reality. They’re Hollywood tales that never ask their audience to think outside the confines of their main characters’ perspectives. They let them go home feeling good.

Not that The White Tiger isn’t a pleasure to watch; the film is often darkly funny, and its stars bring buoyant energy to the story’s first half. It can occasionally feel a little aimless, but the threads all converge in the end. It’s aimed at a Western audience, which means it elides what a film more embedded in the culture it critiques could do — but it’s a solid introduction nonetheless. And the film’s tonal pivot from cheerful boy-makes-good tale into something darker feels all the more jarring.

That’s purposeful. The White Tiger was written and directed by Ramin Bahrani, an American director whose parents immigrated from Iran to North Carolina before he was born. Bahrani started his career with micro-budget gobsmackers like Man Push Cart (2005) and Chop Shop (2007). Though fictional, this early work borrowed from the vérité form of documenting to tell the stories of people that most New Yorkers simply walk past: a street cart vendor, two kids living in poverty on the outskirts of Queens. Bahrani has moved on to more conventionally directed work since then, but he’s always focused on the people at the margins of society. Goodbye Solo (2008) is about a Senegalese cab driver in North Carolina who befriends a suicidal older man. At Any Cost (2012) and the stellar 99 Homes (2014) both center on white Americans who are struggling to escape cycles of generational economic downturn, but are thwarted by a thinly veiled Monsanto on the one hand and the subprime mortgage crisis on the other. 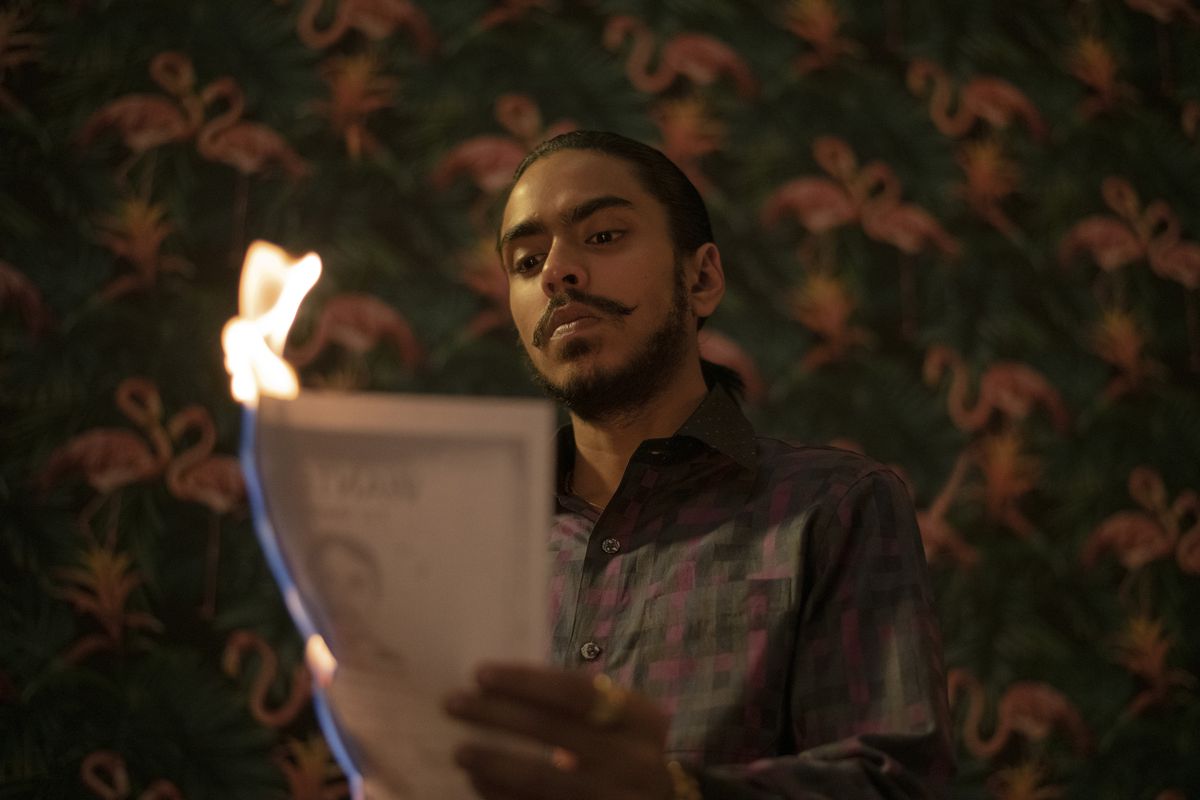 Adarsh Gourav in The White Tiger.

So The White Tiger fits perfectly into Bahrani’s body of work. It is also a deeply confident piece of filmmaking; the movie doesn’t just examine what keeps people down, nor does it aestheticize poverty and turn it into something noble — an impulse that can plague American filmmakers but that Bahrani consistently and deftly avoids.

Instead, The White Tiger feels like a fable, one that illustrates how trapping people in poverty so there will always be someone to do wealthier folks’ bidding is as much a function of psychology and culture as of economic opportunity. If you can convince someone they can only be a poor servant, Balram explains, that’s probably all they’ll aspire to be. And if having servants and masters is all you can imagine, why would anyone want to rock the boat?

The White Tiger is streaming on Netflix.

Every day at Vox, we aim to answer your most important questions and provide you, and our audience around the world, with information that empowers you through understanding. Vox’s work is reaching more people than ever, but our distinctive brand of explanatory journalism takes resources. Your financial contribution will not constitute a donation, but it will enable our staff to continue to offer free articles, videos, and podcasts to all who need them. Please consider making a contribution to Vox today, from as little as $3.