More than 600 environmental, rights and religious groups to present draft order amid widespread shutoffs despite pandemic A broad coalition of organizations is urging Joe Biden and Kamala Harris to mandate a national moratorium on water and other utility shutoffs on day one in the White House, in order to curtail the spread of Covid-19 and ease the financial burden on struggling Americans.

More than 600 environmental, rights and religious groups will on Wednesday present the incoming Democratic administration with a draft executive order that would impose an immediate nationwide ban on disconnecting essential utilities like water, gas and electricity until at least 12 months after the coronavirus pandemic ends.

The groundswell of pressure comes amid mounting reports of water and energy shutoffs across the country despite Covid cases, hospitalizations and deaths spiralling. A study from Duke University last year found that banning water and utility shutoffs helps reduce the Covid infection rates.

Cutting off access to running water is particularly dangerous as regular hand-washing is crucial to minimize the spread of the highly contagious virus. 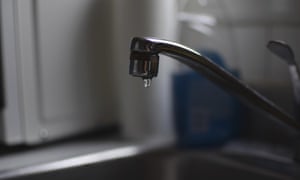 The groups are calling for a nationwide ban on disconnecting essential utilities until at least a year after the pandemic’s end. Photograph: Mackenzie Lad/AP

Yet moratoriums on water shutoffs have so far been patchy and often short-lived. Only 20 states banned disconnections last year despite warnings from public health experts, and 11 of these moratoriums have expired. Currently, 56% of Americans – 183 million people – are at risk of losing their water supply if they cannot keep up with bill payments.

There is no national watchdog tracking water debt and shutoffs, but at least 226 utilities that issued moratoriums last year have also since let the bans expire, according to analysis by Food and Water Watch (FWW).

“This patchwork of protections has more than half of the country falling through the cracks and vulnerable to water shutoffs during the height of the pandemic. Zip code should not determine access to water. This is a basic matter of public health and humanity,” said Mary Grant, the Public Water For All campaign director from FWW, which is spearheading the campaign for a federal moratorium.

The latest federal aid package included $638m to help struggling households pay water bills, but research by the Guardian suggests this is a drop in the ocean:

A growing number of Democratic lawmakers are calling for a national moratorium to end to the zip code lottery.

“In the richest country in the world, no one should have to choose between keeping the lights and heat on, water running, having broadband so their children can go to school, or putting food on the table for their family – especially during a global pandemic when people are being asked to stay at home to curb the spread of infection,” Jeff Merkley, senator for Oregon, told the Guardian.

Rashida Tlaib, the congresswoman for Michigan who has been leading efforts in Washington to transform federal funding for ailing water utilities, supports an immediate national moratorium but said this alone would not solve America’s water crisis.

“We must commit to a serious long-term solution that extends beyond the pandemic, wipes out existing debt, and ensures that nobody ever lives without running water … We will defeat this virus soon, but that cannot mean a return to a ‘normal’ where people are forced to live without running water in the richest country the world has ever known,” said Tlaib.

Water affordability was a growing burden even before the pandemic.

A landmark investigation by the Guardian last year found that millions of Americans were struggling to afford running water due to rapidly rising tariffs and lax regulation. Evidence suggests that communities of color were already disproportionately affected by punitive measures such as shutoffs and foreclosures linked to water debt.

Covid has since exposed – and exacerbated – a multitude of economic and health inequalities and over the past week, the daily average number of new cases has topped 250,000 – higher than ever.

As of Tuesday, 22.6 million people had been infected with the virus, with almost 380,000 deaths so far, according to the New York Times database. Things are likely to get worse as new, significantly more contagious variants from England, South Africa and elsewhere are yet to take hold.

Vaccines are being gradually rolled out, but some scientists have warned that herd immunity is unlikely to be achieved this year.

The economic recovery will undoubtedly take much longer – especially for women of color, who have been disproportionately hit by job losses.

It doesn’t take long for bills to pile up.

Ashlee Brown, a single mother from Knoxville, Tennessee, was furloughed from her job as a medical receptionist between March and August 2020. Debts began to accumulate as it took several months to receive the enhanced federal unemployment benefit, after which she tried her best to catch up on rent and bills. 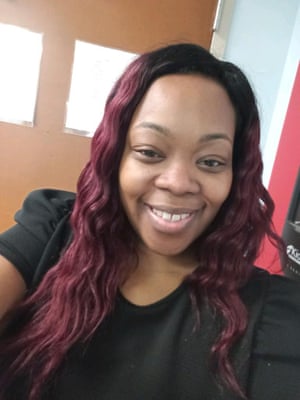 Things started to spiral after the federal unemployment cheques stopped, and the only job she could find, scheduling deliveries for an appliance company, didn’t pay enough to cover household expenses. At the same time, utility and food costs went up as Brown, 35, and her children, aged 10 to 16, were stuck at home.

“I got behind on everything and just couldn’t catch up. I got really down and depressed, losing my job, seeing friends get sick and die, trying to support my kids who were struggling at home … it was a lot, really hard just keeping afloat,” said Brown.

Like millions of Americans, Brown was forced to rely on food aid from a local pantry to feed her family.

The Knoxville utility board (KUB), which provides water, electricity, gas and wastewater for about half a million people, lifted its moratorium on shutoffs in mid-October.

Brown says she paid off the arrears thanks to a local group administering Covid federal aid from the Cares Act. But shortly afterward, she found a pink warning slip hanging on the front door – threatening to shut off their utilities if the new bill were not paid in two days. It was Christmas week, and even though Brown had by then found a better-paid job, she didn’t have enough money.

Luckily, a local grassroots group, Sleeves 4 Needs, stepped in to help – otherwise Brown and her children would have been forced to find alternative emergency accommodation over Christmas.

Constance Every, director of Sleeves 4 Needs, said: “There’s no debt forgiveness, and the charges keep building up which keep people in poverty. It’s inhumane to shut people off from water and energy during a pandemic, but money rules everything in this country.”

In the days before Christmas, the group paid off utility bills for eight vulnerable families at risk of shutoffs, but it turned several others away due to lack of funds.

In a statement, KUB said it had implemented one of the longest pandemic moratoriums in Tennessee, and since then had provided customers struggling to pay bills with repayment options. The company said no households had been disconnected since 10 December as part of its annual winter moratorium.

In Tennessee, where there has been no state moratorium, calls to a non-profit hotline requesting assistance with utility bills increased by 73% last year.

Only eight states – California, Michigan, New Jersey, New York, Vermont, Virginia, Washington and Wisconsin – and the District of Columbia currently have moratoriums in place, but even these don’t include debt forgiveness programs.

It is unclear how low-income households will pay off utility debts without federal intervention.

“There is no question that low-income households are being saddled with debts and we’re going to see a crisis in utility disconnections like never before,” said Elizabeth R Marx, from Pulp, in Pennsylvania. “There must be a plan on what to do with arrears, or else this – just like the housing crisis – will cause a profound economic burden that disproportionately hits low-income families and people of color.”