A Brief History of Georgia's Runoff Voting – and its Racist Roots

Georgia’s adoption of runoff voting was aimed at maintaining segregation by, as one advocate put it, preventing ‘the Negro bloc vote from controlling the elections.’ Across the U.S., many states use different electoral systems. That’s because the federal government doesn’t run elections: States do.

In January 2021, two Georgia runoff elections will take place that will determine which party controls the U.S. Senate.

In one of the Georgia runoffs, incumbent Republican David Perdue faces Democratic challenger Jon Ossoff. The other runoff is a special election triggered by the resignation of Republican Sen. Johnny Isakson. For this race, Republican Kelly Loeffler – who has been serving in Isakson’s former seat since January 2020 – is running against Democrat Raphael Warnock.

The most common electoral system used throughout the U.S. for congressional races is plurality voting. That’s when the winner of an election is the candidate who gets the highest number of votes. In an election with more than two candidates, this can mean a winner with less than majority support.

By contrast, Georgia uses a version of runoff voting for congressional races, which is when there are potentially two rounds of voting. Typically, if a candidate wins more than half the votes in the first round, that candidate is declared the winner. If not, the two candidates with the most first-round votes face off in a second round of voting.

Proponents of plurality voting argue that it is simple to understand and easy to implement. Advocates of runoff voting counter that their system ensures that those elected have the support of a majority of voters.

As Georgia’s history demonstrates, however, adopting a system that requires the support of the majority can sometimes be used to engineer the exclusion of those in the minority. 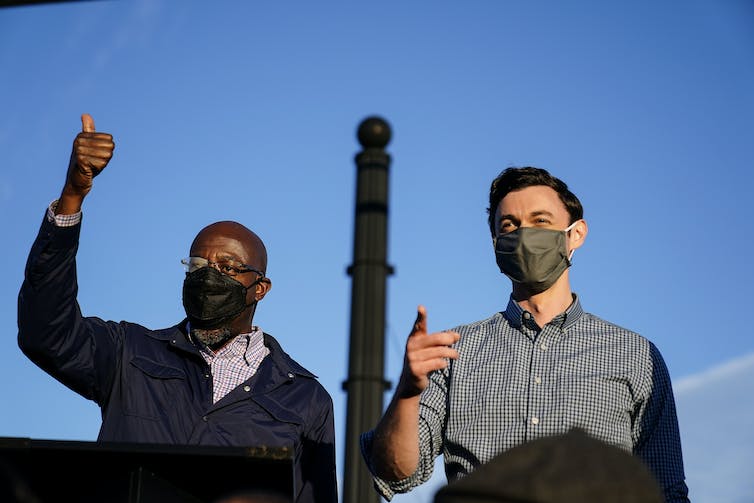 The rise of runoff voting

Scholars trace the birth of runoff voting in modern politics to 19th-century Germany, where it then spread throughout Europe and beyond. In 1906, Norway began experimenting with the system, then in 1928 France adopted it. Even after independence, many former French colonies chose to continue using runoffs, and today, this method of voting is used in various countries throughout Asia, Africa and the Americas.

In the U.S., the adoption of runoff voting at the state level first occurred in the South, after a long process of electoral experimentation.

The Georgia Constitution of 1777 directed that the governor was to be chosen each year by the legislative assembly. That system continued until an 1824 constitutional amendment required that governors be directly elected by voters. Notably, however, in situations where no candidate received a majority, the legislative assembly would make the final determination. This provision was later incorporated into successive Georgia constitutions up through 1945.

It’s important to remember that Abraham Lincoln was a Republican. After the Civil War, many white Southerners came to the realization that only through a united political front could a culture of white supremacy be preserved. As a result, Southerners who were pro-segregation and anti-civil rights universally supported Democratic candidates to all political offices.

In 1966, Howard Callaway decided to try to challenge this legacy by becoming the first Republican nominee for governor of Georgia since 1876. In the election, Callaway won 46.53% of the vote, which was slightly more than Democrat Lester Maddox – his nearest competitor – who netted 46.22% of the vote.

Despite winning a plurality, Callaway did not obtain a majority. Following the 1824 provision, Georgia’s legislative assembly – which was dominated by Democrats – ended up choosing Callaway’s Democratic opponent as the next governor. This led to a series of court battles, eventually culminating in a U.S. Supreme Court decision, which upheld the right of Georgia’s legislative assembly to choose a governor who had lost the popular vote.

The contested election of 1966 provided Georgians with an opening to adopt runoff voting for the election of future governors, other statewide officeholders and its congressional delegation. Runoff voting was already on the minds of many proponents of reform, as Georgia had adopted the system for primary elections just a few years prior.

Back in 1917, Georgia adopted the “county unit system” for all primary elections.

In 1963, the U.S. Supreme Court declared the county unit system unconstitutional as a violation of the “one person, one vote” principle. This prompted Georgian legislators to look for a new electoral system that could similarly, yet legally, suppress the African American vote. Later that year, Denmark Groover – a staunch segregationist – proposed the adoption of runoff voting, as it “would again provide protection which … was removed with the death of the county unit system.”

The fear among whites was that if elections were left to plurality voting, the white vote could be split among several different candidates, while African Americans could – in theory – vote as a single bloc for an African American candidate, who could end up winning with the most votes overall.

Groover was quoted by State Representative James Mackay as having said on the floor of the Georgia House of Representatives that with plurality voting, “the Negroes and the pressure groups and special interests are going to manipulate this State and take charge.” 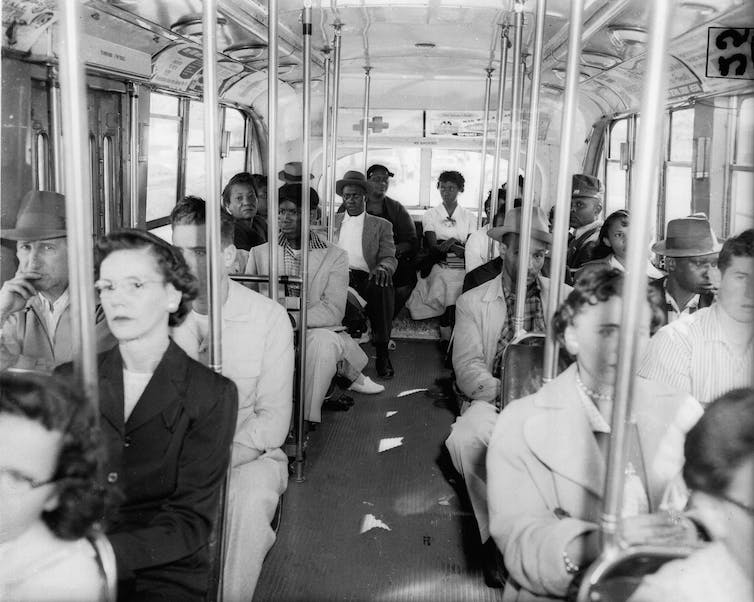 Georgia’s adoption of runoff voting was aimed at maintaining segregation – such as the seating on this bus in Atlanta in 1956 – by, as one advocate put it, preventing ‘the Negro bloc vote from controlling the elections.’ Horace Cort/AP

However, by adopting runoff voting, even if white voters split their vote in the first round and an African American somehow made it to the second round, white voters – from both parties – would still have a chance to unite behind the white candidate to ensure victory. Groover himself advertised his runoff voting bill as being designed to “prevent the Negro bloc vote from controlling the elections.”

In 1964, Georgia adopted Groover’s runoff plan for primary elections. After the contested 1966 gubernatorial election, the state also adopted it for general elections.

Notably, Georgia’s runoff voting process works slightly differently in the event of a special election, such as the upcoming Loeffler versus Warnock Senate race. In such cases, there is no primary, and instead, all candidates – from all parties – appear together on a single ballot in what is called a “jungle primary.” If a candidate wins a majority, they are elected. If no candidate wins a majority, a runoff is held between the top two candidates – even if both are from the same party.

John R. Dunne – who served from 1990 to 1994 as an assistant U.S. attorney general for the Civil Rights Division – argued that Georgia’s runoff voting system has had “a demonstrably chilling effect on the ability of Blacks to become candidates for public office.”

Georgia is now the key to the Senate

With Lyndon B. Johnson’s passage of the Civil Rights Act in 1964 and the Voting Rights Act in 1965, the South began to slip away from Democratic control and has in recent years been solidly Republican.

[Deep knowledge, daily. Sign up for The Conversation’s newsletter.]

However, when Democrat Stacey Abrams narrowly lost the 2018 race for governor, she proved that Georgia is now more purple than red. Democrat Joe Biden’s winning performance in the 2020 presidential election further demonstrates that Georgia’s two U.S. Senate seats are in play.

Given that Georgia’s runoff elections will determine which party controls the Senate, these two races will ultimately influence how much latitude Biden will have to enact his agenda.