Amazon's The Boys' Stormfront is a frightening picture of modern fascism.

Superheroes on screen are always fighting Nazis, in one form or another. The Avengers battle an evil organization with roots in World War II that uses the tagline “Hail Hydra!” instead of “Heil Hitler!” The evil Orm in the 2018 DCEU movie Aquaman spouts quasi-eugenic burble echoing Nazi propaganda about genetic superiority — except in Orm’s case, it’s Atlanteans who are superior to surface dwellers, rather than Aryans who are superior to Jewish people. Magneto in the early X-Men movies spouted similar quasi-eugenic burble about mutants’ genetic superiority over boring non-super-powered humans — even though he’s canonically a Holocaust survivor himself, his rhetoric echoes Nazi propaganda, in fantasy form. There are direct comparisons, as when Captain America compares Loki to Hitler in the first Avengers film. There are weird sleight-of-hand references, as in Wonder Woman, where the World War I Germans are clear stand-ins for the Nazis Wonder Woman fought in her original comics. One way or the other, creators find a way to suggest that their supervillains are just quasi-Nazis in capes and tight-fitting pants.

Actual Nazis, past and present, don’t generally wear capes or have super-powers, though. Fascist supervillains on screen often represent fascism in ways that are misleading or garbled. Superhero narratives can be leery of directly addressing the racism at the core of Nazi beliefs. Nor do they do a good job of explaining why Nazi ideology appeals to some people, or how non-super-powered fascists manage to gain power, when they do. Our screens are filled with representations of Nazis who don’t look much like real Nazis — and as a result, people often have trouble identifying fascists when they show up in real life and don’t look or act like supervillains. There’s a whole subgenre of media articles about fascists which express shock that some of them are well-dressed, as if we expect them to show up wearing Loki’s horns or Magneto’s helmet.

Not all superhero representations of fascism are misleading. Damon Lindelof’s Watchmen series on HBO is a refreshingly clear indictment of white supremacy. And so is season 2 of Amazon Studios’ adaptation of Garth Ennis’ comic The Boys. The Nazis in The Boys — who are also the characters masquerading as its heroes, at least in the public eye — still wear improbable costumes and fire force-bolts. But they also wield propaganda and racist resentment with uncomfortable verisimilitude.

The main problem with most fictional fascists, from supervillains to fantasy overlords, is that they’re designed to remove the racism from Nazi ideology. Supervillains generally threaten all humankind at once. They present fascism as a universal threat, rather than as an ideology deliberately targeted at marginalized people.

Magneto, the super-powered mutant, thinks all humans are inferior. His eugenic theories discriminate equally against white and Black people, Jews and gentiles. When Loki gives a Hitler-esque megalomaniac speech in Germany in the first Avengers film, he calls for all humans to bow down before him. He doesn’t single out any one group.

The most striking exemplar of this superhero mode of race-blind fascism is Thanos in Infinity War and Endgame. In those two movies, Thanos commits atrocities which fairly clearly reference the Holocaust. His justification for his actions is a kind of incoherent Malthusian eco-fascism: the universe is too crowded, and sentient beings must be swept away to preserve scarce resources.

Thanos’ solution is to pick half of the population of the galaxy at random and destroy them in a pure, egalitarian genocide, ignoring race, class, and political affiliation. Everyone is threatened equally, so everyone is equally invested in fighting the threat. This dynamic has never actually existed in any actual genocide in the history of the world. On the contrary, real-world Nazis tend to scapegoat particular marginalized groups, and solidify support by appealing to bigotry and pre-existing hatreds. That’s the subject of the famous Martin Niemoller poem, which points out that the Nazis came first for the Communists, then for Jewish people. Niemoller’s point is that to fight fascists,you need to pay attention to the plight of groups society generally doesn’t care about. But the heroes fighting Thanos don’t need to think about the margins, because Thanos’ fascism is so uniformly mainstream.

The second season of The Boys, contra Endgame, knows Nazi prejudices are dangerous because they’re particular, not universal. The explicitly Nazi superwoman Stormfront (Aya Cash) uses anti-Asian ethnic slurs while murdering a superpowered Japanese man. She pushes A-Train (Jessie T. Usher) off the superhero team the Seven because he’s Black. Her ally Homelander (Antony Starr) stalks and terrorizes his ex, Queen Maeve (Dominique McElligott), then outs her as bi on national television. Like the Nazis, Homelander hates disabled people. When a blind, Daredevil-esque superhero is about to join the Seven, Homelander erupts in rage and physically assaults him, because he believes the hero’s disability makes the team look weak. 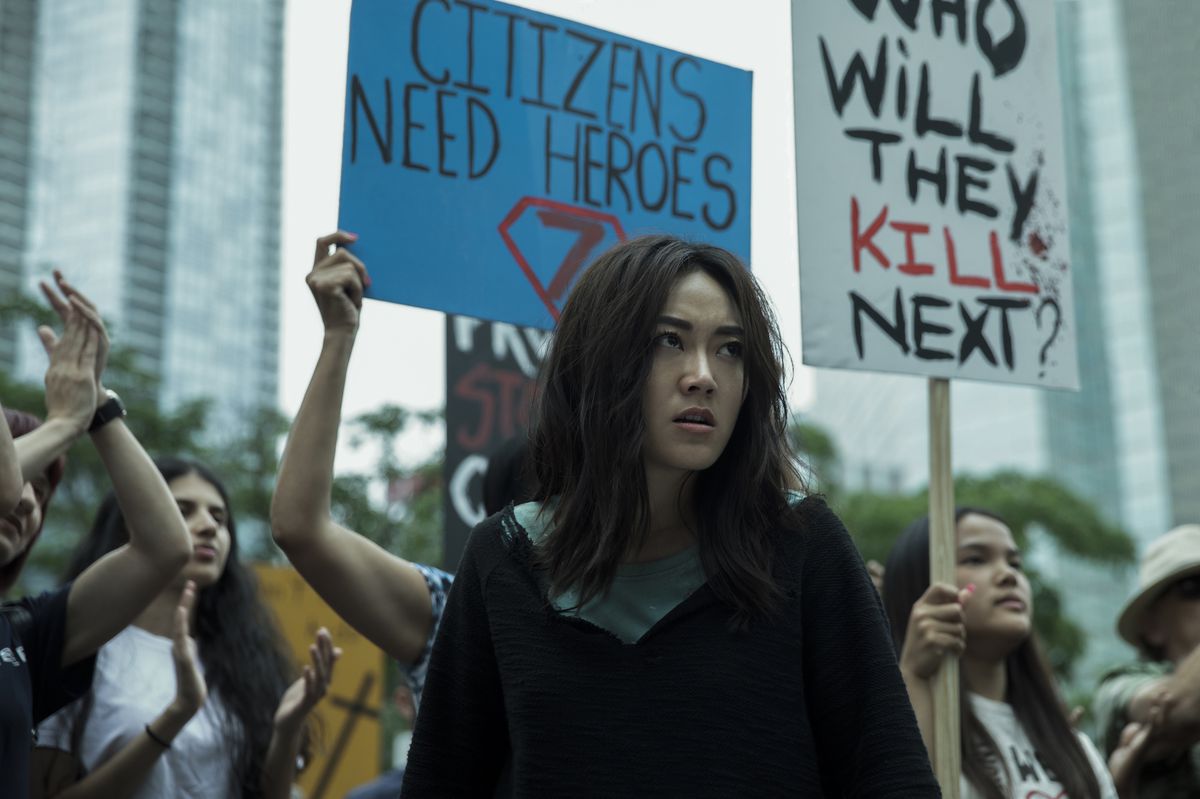 Stormfront and Homelander are both beloved by the public. In part, that’s because they hide many of their most horrific acts and opinions. But it’s also because fascistic nationalism and demonization of marginalized people is popular. Stormfront and Homelander exploit American nationalism and xenophobic panic. They warn of the threat of superpowered illegal immigrant terrorists — directly echoing Republican, Trumpian rhetoric about disease-spreading immigrant supercriminals and Muslim invasion. Fascism in The Boys, as in real life, calls the public to their worst selves. Thanos comes for everyone, but Stormfront picks her targets more carefully, and as a result, she’s able to create a groundswell of support for violence and authoritarianism.

Stormfront targets immigrants just like contemporary neo-Nazis do, and like them, she also uses social media, memes, and cool-girl anti-establishment branding. She gives speeches decrying the elite corporate establishment for being squishy and weak, and for downplaying the threat from superpowered immigrants. Stormfront is hip, irreverent, and anti-corporate, spinning exciting conspiracy theories in the interest of ratcheting up populist enthusiasm for a program of hate and genocide. Her fascism is alt-right and up to date. Even her name, Stormfront, references the most infamous current real-life white-supremacist website.

The Boys’ engagement with contemporary fascism sets it apart from other superhero narratives. It also distinguishes it from the slew of recent anti-Nazi pulp shows like Amazon’s Hunters and The Man in the High Castle, or HBO’s The Plot Against America. These series all portray Nazi racism clearly, but they’re also all, more or less, historical. Their Nazis wear swastika armbands rather than MAGA hats or Pepe the Frog shirts. Even Watchmen focuses more on legacy white supremacists like the KKK than on, say, the Proud Boys. And again, all of these shows fail to engage with the extent to which anti-immigrant and Islamophobic demagoguery have become central to far-right movements in the last decades, and especially under the Trump presidency. Every show doesn’t have to cover every aspect of racism. But by portraying it as a limited and primarily historical problem, they let the audience off the hook politically and emotionally, letting them feel good about the supposed defeat and destruction of ideals and behaviors that are actually still alive and flourishing in American society today.

This isn’t to say that The Boys never misses a trick. Centering the experiences of marginalized people is vital when you’re trying to identify, and strategize against, fascism. But The Boys’ cast (unlike Watchmen’s) is mostly white, which somewhat undercuts its anti-racist message. It also doesn’t feature any explicitly Jewish characters, and Stormfront doesn’t voice much overt anti-Semitism. Hunters and The Plot Against America are more on target in acknowledging how central hatred of Jewish people is to fascist movements.

Despite these caveats, The Boys’ knowledgeable, principled, and effective depiction of Nazi evil is impressive, especially in the context of a genre that has often handled fascists with glib cluelessness. Stormfront and Homelander wear silly capes and shoot force rays like their supervillain peers. But their biases ring truer. If we only see Red Skull-style retro-Nazis on screen, it’s easier to miss the more up-to-date fascists who skulk on the internet, rather than goose-stepping down Main Street. By comparison, The Boys is startlingly good at depicting fascism as it is right now in the United States, the prejudice and weaponized hatred on display at the Republican National Convention, on Twitter, or in the streets.