This week, we explore the tug of war between protecting union jobs and the transition to a cleaner economy. Climate change protesters in D.C. push for the reallocation of money away from the military to fund a Green New Deal in September 2019., Mark Wilson/Getty Images

A DIVIDED MOVEMENT — Organized labor is often viewed as a cheerleader for the left, helping shape the agendas of Democratic lawmakers. But in statehouses from coast to coast and at the national level, unions have had no problem blocking green initiatives if they decide they're not in their members' interests.

Those who stand to lose the most from tightening environmental policies have been wielding their power the past few months to kill proposals in statehouses across the country. Broadly, the split among unions is most marked between trade unions whose jobs are tied to the fossil fuel industry and those representing the service sector, like health care, government and custodial workers.

“In recent years, the public employees have been siding mostly with the environmentalists and the private sector have been siding with our opinion, which is yes, we're pro-environment but ... we also want to be able to afford to live here and have jobs here,” said Kate Gibbs, deputy director of the Engineers Labor-Employer Cooperative, a trades union.

Environmental protection and union jobs are a fault line among Democrats, which will only be magnified nationwide if Joe Biden defeats President Donald Trump in November. Biden will be under pressure from the left to enact major climate action similar to the "Green New Deal," which many national labor union leaders oppose. The Democratic National Committee last month scrapped language in its platform calling for an end to fossil fuel tax breaks and subsidies, despite Biden's campaign arguing the move would ultimately benefit unions. 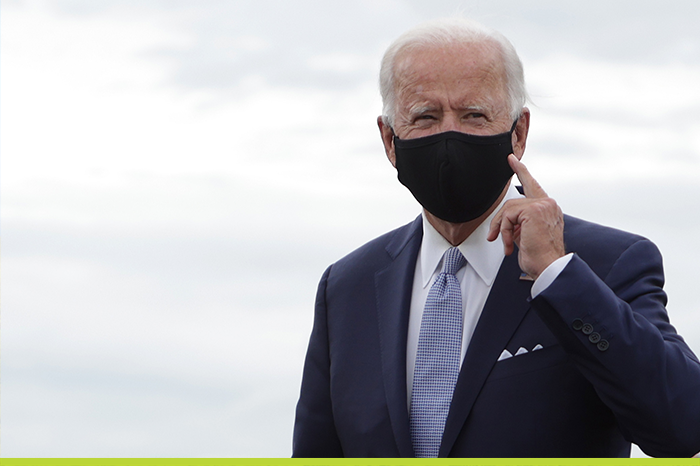 If Joe Biden wins in November, he will be under pressure to enact major climate action similar to the Green New Deal, which many national labor union leaders oppose. | Alex Wong/Getty Images

Take California, where Democrats dominate state government. In a recent tug of war over the blue-collar constituency, the unions proved decisive. Electrical and ironworkers, pipe fitters, boilermakers and construction workers, along with oil companies and the state Chamber of Commerce, persuaded three Democratic senators to vote against a bill that would have mandated no-drill zones around certain populous areas — killing the effort for the year.

"We've got a little bit stronger voice for working people than most other people," said Robbie Hunter, president of the State Building and Construction Trades Council of California, the parent organization for 160 local unions that represent 400,000 workers across more than a dozen different trades, which spearheaded opposition to the bill.

In Pennsylvania, Democratic state lawmakers were recently frustrated by AFL-CIO, Building Trades and International Brotherhood of Electrical Workers' support of a bill that would block the state from joining the Regional Greenhouse Gas Initiative, a cap-and-trade program to reduce emissions from the power sector.

“It's this fundamental tension,” a California state lawmaker said on condition of anonymity to avoid political repercussion. “It underlies everything from the Green New Deal at the national level to California's climate action agenda.”

‘Just worried about today': Unions have found common ground with environmentalists on issues like replacing lead pipes, upgrading stormwater infrastructure and developing offshore wind, an industry slated to create thousands of manufacturing and construction jobs. In California, electrical, pipe trades and sheet metal workers' unions are working with environmentalists on a bill to fund HVAC and water-system improvements in schools.

In New Jersey, a coalition called Jersey Renews — whose membership includes branches of the food, health care, communications and steelworkers unions, among others — has attempted to consolidate the support of disparate groups to advance climate change mitigation strategies.

Kevin Brown, New Jersey State Director of SEIU 32BJ that represents 175,000 service workers across the Northeast and is a member of Jersey Renews, said climate change became a top concern for his members after they were disproportionately affected by the devastation of Hurricane Sandy.

“It’s just a difference of opinion, one that’s really a matter of life and death, and the trades are just worried about today, and that's a huge mistake," Brown said.

A ‘JUST TRANSITION' TO A CLEAN ECONOMY — The blue-green divide over tackling climate change largely comes down to this: What happens to the unionized workers displaced by the shift to renewable energy? Will these new green jobs be just as well-paid and come with benefits? Will they be created in the most economically distressed areas and communities of color? What should training look like?

The BlueGreen Alliance, which unites 13 labor unions and environmental groups, has some answers for state governments. It developed a policy guide that includes mandating labor agreements as a condition of awarding contracts for new projects, investing in apprenticeships, enforcing local and targeted hiring policies that consider candidates who are women, minorities, veterans, the formerly incarcerated or Indigenous people, as well as establishing a wage floor that contractors must pay. The Alliance said failing to account for income and racial inequality would only exacerbate current trends and leave middle-class workers more vulnerable to economic crises.

The document doesn't discuss the politically fraught issue of compensating workers who are displaced, however. In Colorado, Democratic Gov. Jared Polis last year enacted clean energy laws backed by state labor groups, which secured a provision requiring the government to make up the difference between coal workers’ pay from their old jobs and their new ones, among other guarantees.

Phil Smith, director of communications and government affairs for United Mine Workers of America, said sweeping climate platforms offered by congressional Democrats and Joe Biden haven’t been specific enough about how they would make coal workers whole.

“We shouldn’t be solving the problem on the backs of Appalachian coal miners, or those working in oil and gas fields,” Smith said. “We don’t believe any climate legislation should be enacted if it doesn’t include a significant and specific program to help workers and communities disproportionately impacted. And it can’t just be training for something else. Workers and families have to be kept as whole as possible.”

UMWA, which isn't a member of BlueGreen Alliance, in the next month plans to talk to Congress about what should be included in legislation. The union’s president endorsed a bill introduced by Sen. Tammy Duckworth (D-Ill.) in July that would expand Medicare to all coal workers who have lost their jobs, make higher education free for them and their families, and invest in renewable energy development in their communities.

Payton Wilkins is national director of the Coalition of Black Trade Unionists’ Education Center. The coalition has about 8,000 members and recently endorsed Biden — marking only the third time since being founded in 1972 that it picked a candidate. Even though the coalition is “pretty radical” in supporting climate justice, members get skittish when discussions about compensating displaced workers arise, Wilkins said. 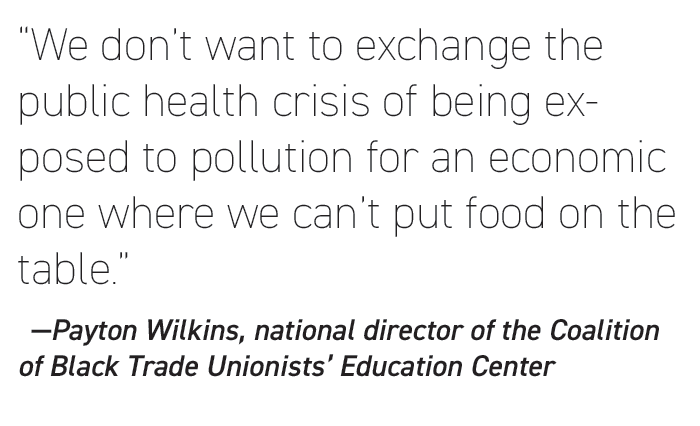 “Some people call it socialism, some call it communism. A lot of people are turned off by the notion of a universal basic income, but want to know what their income will be during a transition [to a cleaner economy],” Wilkins added, noting that Black workers also wrestle with an additional burden: the American stereotype that they are lazy.

“Members understand the link between health and the workplace. But we don’t want to exchange the public health crisis of being exposed to pollution for an economic one where we can’t put food on the table,” he said.

CAPTURING THE PROBLEM — Some unions are holding out for widespread adoption of technology that catches greenhouse gas emissions at their source and stops them from entering the atmosphere. That way, extractive industries can stay in business and keep people employed.

Capturing carbon, storing it in the ground or using it for another industrial purpose, is many fossil fuel companies’ answer to climate change, and the Intergovernmental Panel on Climate Change in its 2018 report said keeping global temperatures from rising above catastrophic levels likely involves the technology.

There are only 10 large-scale operational facilities in the U.S. today, and another 11 around the world, according to the Global CCS Institute, a think tank working to expand the technology.

Smith of United Mine Workers of America said even though coal plants are being shut down in the U.S., hundreds of new plants are still being built around the world, including in China and India, which are top contributors to man-made climate change.

However, Smith acknowledged that a window of opportunity is closing. Widespread adoption of carbon capture and storage requires potentially tens of billions in public and private sector investment for research, development and construction. Right now, without a price on carbon, there are few short-term economic benefits for companies. On Capitol Hill, Republicans don't want to invest a lot of federal money in what they argue should primarily be market driven. Many Democrats are open to it, but also feel pressure from some green groups, who note that the technology can be used for oil recovery and argue it keeps the country subsidizing fossil fuels.

There was bipartisan support for a tax credit that Congress included in must-pass federal spending legislation two years ago, targeted to companies building new carbon capture and storage projects through 2023. But the IRS hasn't issued complete guidance yet. Given the delay, some lawmakers are pushing to extend the deadline for using the tax break.

— The world’s largest asset managers are opposed to a Labor Department proposal that would make it more difficult to incorporate environmental, social and governance factors when making investment decisions, Bloomberg reports.

— About 80 percent of Americans are concerned about single-use plastics, a drop from last year when 87 percent said they were concerned, according to a new survey by The Consumer Brands Association that represents food, beverage and consumer product companies. Only 17 percent of respondents said the U.S. should ban single-use plastic entirely, while 62 percent agreed that improving the recycling system to process more plastic is the best way to deal with waste.