film The Prison Within: Inside A Moving Documentary About Restorative Justice

In a powerful new film, director Katherin Hervey explores a program at San Quentin prison that pairs inmates with ‘surrogate victims’ as a form of therapy Troy Williams had his guard up when Katherin Hervey visited San Quentin state prison, where he was serving a life sentence for kidnapping and robbery. The director was there to record inmates for what would become the restorative justice documentary The Prison Within.

Williams was the resident film-maker in San Quentin. He’s also the founder of the San Quentin Prison Report, a media company that produces radio and video from inside, giving inmates a voice and building a dialogue from within those walls. Until he was paroled in 2014, Williams kept an eye out for news and other media organizations entering the prison walls. He told the Guardian how he was wary that media would resort to fearmongering tactics, showing prisoners for what they were instead of who they are, stripping away their humanity and feeding into public a desire for carceral punishment, which favours longer sentences as a deterrent from crime.

But Hervey, a former public defender, made Williams feel immediately comfortable. She was there to record a session with the Victim Offender Education Group (VOEG), a restorative justice program developed by the Insight Prison Project. In the film, men convicted of murder gather for unguarded therapeutic discussions. They accept responsibility for their crimes, weigh the hurt that they caused and identify the traumas in their own lives that contribute to their fateful decisions. Heartbreaking stories about abuse, poverty, survival and the loss of loved ones come to the fore.

In an astonishing feat of empathy, the VOEG program pairs an offender with a “surrogate victim”, who is a person hurt by a similar crime, whether it be rape, robbery or murder. In tearful conversations, the offender and victim share their experiences and find common ground. In that way, restorative justice serves victims as well as the offenders, helping both heal from trauma to better reintegrate into society. Emotionally, victims are in a prison too.

Williams, who is both a talking head and a credited cinematographer on The Prison Within, was a participant in the VOEG program. He later became a facilitator for a number of years. He currently lives in Oakland and, like Sam Johnson and Michael Nelson, other participants from the documentary, became a community leader advocating for restorative justice. Williams owns a company called Restorative Media and has given a Ted Talk on reintegrating back into society.

He said he believed in restorative justice before he even knew what it meant. “It gave me a vocabulary for what my heart already knew,” he explained, describing the restorative process as gaining a mastery over emotions. He added that restorative justice has been in practice for centuries within indigenous and African communities, where an offender is held accountable to a village or a tribe. “It’s not like something happens, you just throw this person away,” he said. “You would find a way to reconcile with them.”

Hervey and producer Erin Kenway, another former lawyer who practiced in high conflict domestic violence cases, said the intimate stories in their documentary anchors a conversation that stretches beyond San Quentin’s walls and the runtime of a single documentary.

“Mass incarceration is this funnel of everything that is wrong,” Hervey told the Guardian, citing race, class and systemic oppression as widespread societal issues that contribute to marginalized people being over-represented in prisons. Kenway told the Guardian that lack of education, health resources and childcare are other contributing factors they didn’t cover in their documentary that also lead to mass incarceration; all are worthy subjects for another film. 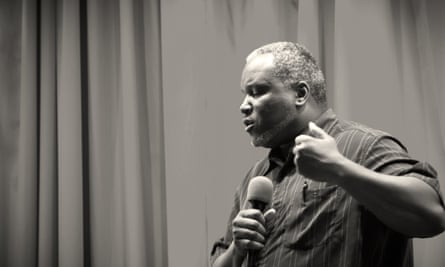 The Prison Within gestures towards the bigger picture while homing in on intimate accounts. Experts like Sujatha Baliga from the Restorative Justice Project explain how the current prison system in the US is criminogenic. Instead of healing, carceral punishment revictimizes, hurting inmates and their families; continuing a destructive cycle that begins with intergenerational trauma from slavery and colonization. The Prison Within can only touch on how the prison industrial complex operates like a new form of slavery, the argument laid out in Ava DuVernay’s documentary The 13th.

The militarization of police is also outside the film’s scope, along with the trauma law enforcement inflicts on marginalized communities. But The Prison Within stays relevant to the current conversation on defunding the police, which has grown louder since the murders of George Floyd and Breonna Taylor in the US.

“We don’t need the overpolicing of communities that may have drug issues,” said Williams. “That’s a public health issue.”

Like restorative justice, defunding the police is about healing and breaking the cycle that leads to mass incarceration. Protesters in the US call for divesting funds from a heavily militarized police force that could instead be used for education, mental health and other community supports. But opponents make defunding the police and steering away from carceral punishment sound like stretches of the imagination. Hervey admitted that, like systemic oppression, these systems are so deeply entrenched. Fixing them requires a complete mental and emotional overhaul.

“We lock away what we don’t want to confront,” says the actor Hill Harper in his narration for The Prison Within, describing a system that is easier in the short term, but destructive in the long haul. 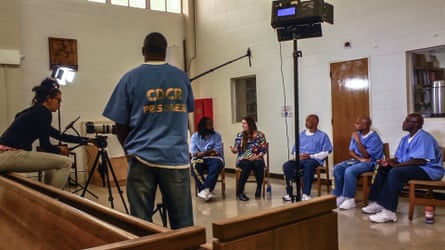 A behind the scenes still from The Prison Within. Photograph: Gravitas Ventures

Dionne Wilson is a beacon of hope in The Prison Within. She’s a former rightwing gun store employee whose police officer husband was shot and killed, leaving behind two children. Wilson, whose last name at the time was Niemi, rallied for the death penalty against the offender, Irving Ramirez. She has since been fighting to spare Ramirez’s life and abolish the death penalty.

The Prison Within followed Wilson’s unexpected and inspiring transformation. She went from seeking retribution to finding empathy for her late husband’s killer. But while examples like Wilson are proof that humans who try hard enough can embrace the value of restorative justice, there are other examples that show the limits to that capacity.

In 2016, NBC Bay Area reported on the impending choice California voters had to make between Proposition 62 and 66, which gave California voters the option to either abolish the death penalty or speed it up. In that report, Wilson spoke in favour of Proposition 62, while Marc Klaas rallied passionately in favour of Proposition 66. The latter’s 12-year-old daughter Polly was abducted, raped and murdered. And he wanted to make sure the man convicted of killing her served his sentence to the end.

Even Williams admitted that harming a child would test his own capacity for empathy. “I’m pretty sure my thoughts are going to be not good,” he said. He wonders whether that reaction is conditioning or innate. “I want you to feel the pain that my loved one felt,” he said, describing the very reaction he had when his own brother was murdered. For Williams, time healed.

“You have to be in a sad situation to take somebody’s life,” he said, finding the empathy for the person responsible for his brother’s death. “When you take a life, you feel that. That sits with your spirit. I’ve lived that.

... in the coming months, and the results will define the country for a generation. These are perilous times. Over the last three years, much of what the Guardian holds dear has been threatened – democracy, civility, truth.

The country is at a crossroads. Science is in a battle with conjecture and instinct to determine policy in the middle of a pandemic. At the same time, the US is reckoning with centuries of racial injustice – as the White House stokes division along racial lines. At a time like this, an independent news organisation that fights for truth and holds power to account is not just optional. It is essential.

Like many news organizations, the Guardian has been significantly impacted by the pandemic. We rely to an ever greater extent on our readers, both for the moral force to continue doing journalism at a time like this and for the financial strength to facilitate that reporting.

We believe every one of us deserves equal access to fact-based news and analysis. We’ve decided to keep Guardian journalism free for all readers, regardless of where they live or what they can afford to pay. This is made possible thanks to the support we receive from readers across America in all 50 states.

As our business model comes under even greater pressure, we’d love your help so that we can carry on our essential work. If you can, support the Guardian from as little as $1 – and it only takes a minute. Thank you.

Remind me in October