2020 Uprisings, Unprecedented in Scope, Join a Long River of Struggle in America

To achieve . . . structural change will require the rapid development of new forms of leadership and new organizational structures for the protest movement. The river was the metaphor that best captured “the long, continuous movement” of the black freedom struggle for theologian, historian and civil rights activist Vincent Harding. Harding, who had served as a speechwriter for Rev. Martin Luther King Jr., wrote in his groundbreaking 1981 study of African-American history, “There is a River: The Black Struggle for Freedom in America” that the freedom struggle was “sometimes powerful, tumultuous, roiling with life; at other times meandering and turgid.”

When I think of the sudden, explosion of anti-racist protest that has overwhelmed the nation’s cities over the past two weeks, it is Harding’s metaphor of the river that comes to mind.

It is as if the dam has broken, and the many currents of the American protest tradition — not just the anti-racist tradition, but the anti-corporate and anti-war protest traditions; women’s, LGBTQ and student movements; movements for workers’ rights and economic justice — have all come together in a massive river of outrage and sorrow, exhilaration and hope.

This weekend, tens of thousands of protesters joined the river in massive demonstrations in hundreds of cities across the country, from New York City to Jackson, Michigan, from Washington D.C. to Louisville, from Philadelphia to Seattle.

The River of Protest

Numerous commentators have compared the events of the past few days to the urban uprisings that shook 125 cities in the aftermath of the April 4, 1968, assassination of Martin Luther King, Jr.

But as an historian of black social movements, my view is that as widespread and destructive as the 1968 rebellions were, neither their size nor the challenge they posed to the American political system approached what the U.S. has seen over the past two weeks. According to USA Today, as of June 4 there have been protests in 700 cities and towns since the death of George Floyd in police custody. 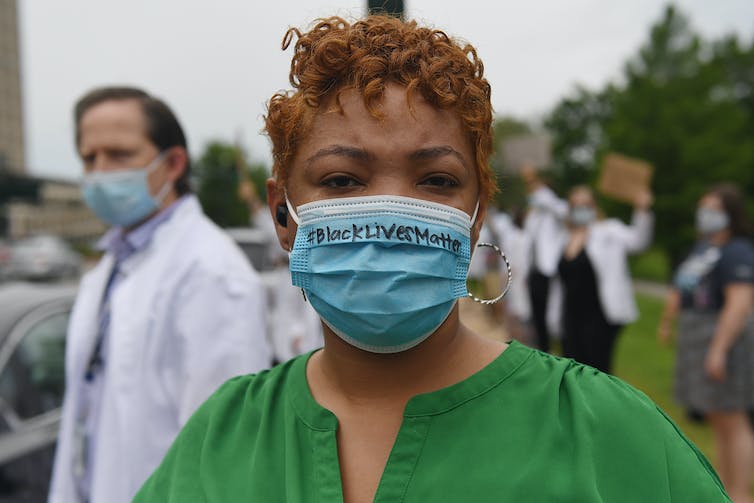 Protests have spread across the nation, including to St. Louis, where several hundred doctors, nurses and medical professionals demonstrated against police brutality and the death of George Floyd on June 5, 2020. Michael B. Thomas/Getty Images

This remains true even if we consider the protests and police violence that shook the Chicago Democratic Convention in August 1968. Similarly, the scope and scale of the 2020 protests dwarf the student strikes that shut down hundreds of college campuses in the aftermath of the shootings of student protesters at Kent State and Jackson State in May 1970; the six days of protest and looting that shook Los Angeles in the aftermath of the 1992 Rodney King trial; the 1999 “Battle of Seattle,” during which protesters used a mix of nonviolent and more militant tactics to disrupt a World Trade Organization conference and the 650 cities that hosted Women’s Marches in January, 2017.

More than the number and size of the protests, though, what makes the 2020 uprisings unprecedented are the ways that they have pulled together multiple currents within the U.S. protest tradition into a mighty river of demand for fundamental change in American society.

The spark, of course, was the horrifying video of yet another police killing of an unarmed African-American, George Floyd.

The nation was confronted with incontrovertible evidence, played out over 8 minutes and 46 seconds of video, not only of wanton disregard for black life but also of the ongoing failure of political institutions to solve the problem of racist police violence.

On top of the disproportionate death rates and economic devastation that COVID-19 has wrought on communities of color, a harsh light has been shone on the structural racism rampant in American society. 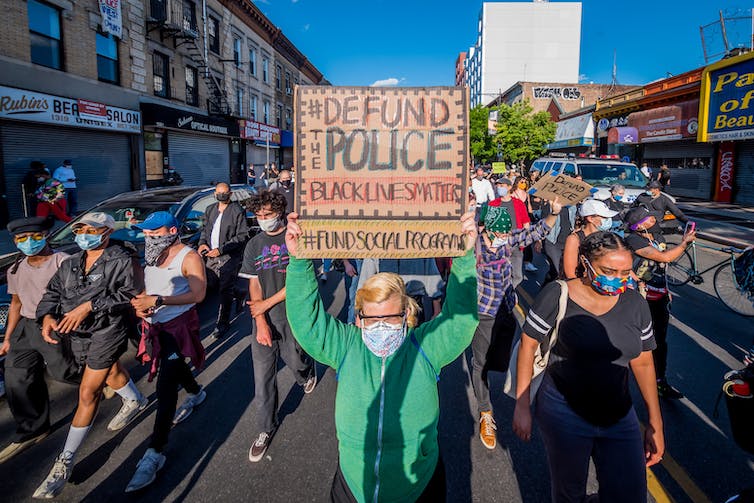 Among the comprehensive range of demands by protesters is this one: Defund the police. Erik McGregor/LightRocket via Getty Images

But while the murder of George Floyd was the spark, the fuel for the uprisings comes from many sources: the worst public health and economic crisis in generations, three and a half years of a divisive and chaotic presidential administration, a burgeoning white nationalist movement and decades upon decades of growing economic inequality amid an increasingly threadbare social safety net.

The focus of the protests has been on police violence and the nation’s unfinished racial justice agenda. But the diversity of protesters and the use of protest tactics —- from nonviolent marches and rallies to civil disobedience, rock throwing and looting —- drawn from the traditions of youth, labor and anti-corporate protest make it clear that even more is at play in the uprising.

The point is not, as others have argued, that it is the level of involvement of whites in the protests that distinguishes them from previous high points of anti-racist protest. There is in fact a long history of white support for, and participation in, black protest movements.

What is unprecedented is the way that protesters of all races and ethnicities have focused their ire on upscale business districts and national retail chains (as opposed to neighborhood businesses), while others have called for the redirecting of public spending from the police, prisons and other elements of the criminal justice system to health and social welfare programs.

Despite, or perhaps because of the protests’ decentralized and leaderless nature, they have managed to put on the table the broadest and most comprehensive set of social and economic reforms since the Poor People’s campaign that followed on the heels of Martin Luther King’s assassination in 1968.

From calls to shift funding from police budgets to programs for the poor to proposals for renewed public investment in minority businesses and urban neighborhoods, the uprisings are likely to reshape public policy debates for months and even years to come.

It is impossible to know whether the protests can or will be transformed into sustained campaigns to reform the criminal justice system or reinvigorate government programs for the poor and economically downtrodden. To achieve that level of structural change will require the rapid development of new forms of leadership and new organizational structures for the protest movement.

But as unlikely as that may seem, remember that no one could have predicted that the U.S. was on the verge of this level of mass mobilization of anti-racist protest two short weeks ago.

[Insight, in your inbox each day. You can get it with The Conversation’s email newsletter.]