“This Extraordinary Being” reveals that the show's America’s first costumed crime fighter was William Reeves, the childhood survivor of the destruction of Tulsa, Oklahoma’s Black Wall Street, and a queer black man. HBO’s Watchmen bills itself as a continuation of the influential 1986 graphic novel, not a remake, and it has followed through. With a story set 34 years after the events of the book, the show has explored the fallout from Watchmen, but not interacted with its story directly.

But that all changes in the series’ sixth episode, “This Extraordinary Being,” in which Watchmen the TV show makes a big change to Watchmen the comic — and does it without actually changing a thing. 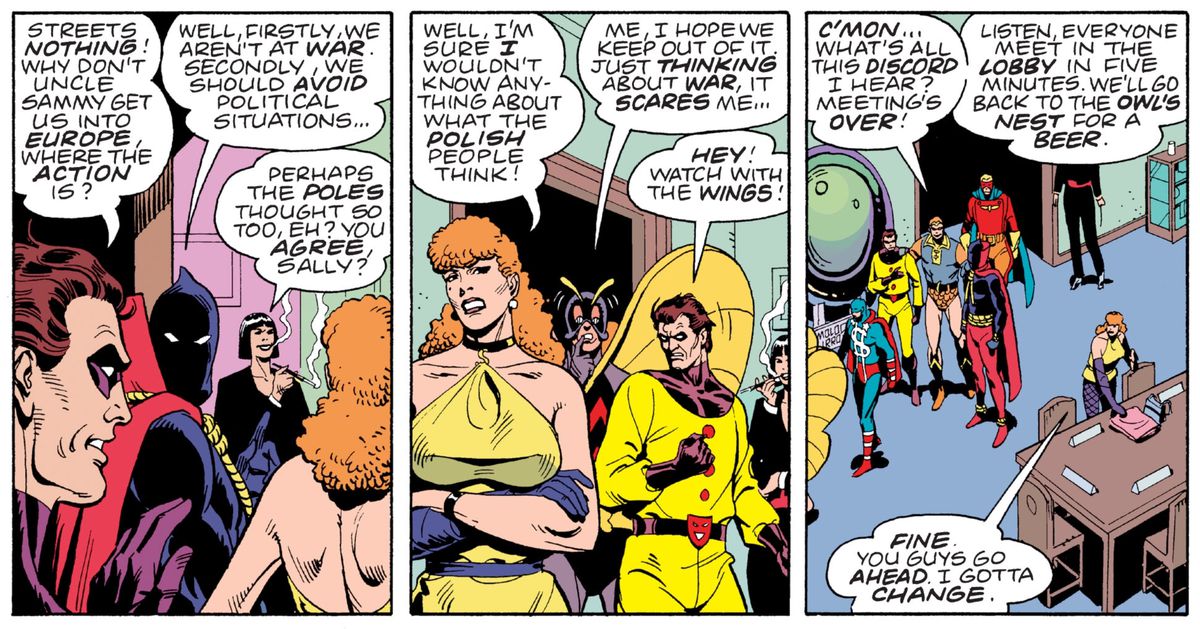 “This Extraordinary Being” reveals something that the original Watchmen comic stubbornly left a mystery: the identity of Hooded Justice. America’s first costumed crime fighter, who inspired the other Minutemen to take up the life, was William Reeves, the childhood survivor of the destruction of Tulsa, Oklahoma’s Black Wall Street, and a queer black man.

This is a big expansion on the original source material. But what’s fascinating about it isn’t just the change itself, but how expertly the folks behind HBO’s Watchmen knitted it into the canon of the Watchmen book.

WHO WAS HOODED JUSTICE IN THE COMICS?

For a character who was the very first “superhero” of their alternate history of the United States, Alan Moore and Dave Gibbons offered few details about Hooded Justice in their comic. He appears in only one scene in the 12-issue series, and the vast majority of what we know about him comes from a secondhand account: Under the Hood, the fictional memoir of Hollis Mason, aka Nite Owl. Watchmen episode 6’s title, “This Extraordinary Being,” is a direct quote from Under the Hood.

WHAT THE COMIC TOLD US

First, we have an idea of how he began his career. In his book, Mason describes Hooded Justice’s first known appearances — which inspired him to become a crime fighter — using quotes from news sources. As Watchmen TV creator Damon Lindelof sees Moore and Gibbons’ text as sacrosanct, we can probably consider this information pretty reliable:

An attempted assault and robbery that had taken place in Queens, New York. A man and his girlfriend, walking home after a night at the theater, had been set upon by a gang of three men armed with guns. After relieving the couple of their valuables, the gang has started to beat and physically abused the young man while threatening to indecently assault his girlfriend. At this point, the crime had been interrupted by a figure ‘Who dropped into the alleyway from above with something over his face’ and proceeded to disarm the three attackers before beating them with such severity that all three required hospital treatment and that one subsequently lost the use of both legs as a result of a spinal injury. [...] And then, a week later, it happened again. [...]

A supermarket stick-up had been prevented thanks to the intervention of “A tall man, built like a wrestler, who wore a black hood and cape and also wore a nose around his neck.” This extraordinary being had crashed in through the window of the supermarket while the robbery was in progress and attacked the man responsible with such intensity and savagery that those not disabled immediately were only too willing to drop their guns and surrender. Connecting this incidence of masked intervention with its predecessor, the papers ran the story under a headline that read simply “Hooded Justice.” The first masked adventurer outside comic books had been given his name.

If you’ve watched “This Extraordinary Being,” you can recognize both of these incidents as scenes in the show.

“Reading and rereading that news item,” Mason says, “I knew that I had to be the second. I’d found my vocation.” He goes on to explain that within 12 months of Hooded Justice’s first appearance in the news, nearly a dozen costumed heroes had begun working.

We know that Hooded Justice was not among the first people to respond to Captain Metropolis’ call to found the Minutemen crime-fighting alliance, but that he did eventually join. During his tenure, he and the original Silk Spectre, mother of the Watchmen TV show’s Agent Blake, had a relationship — or at least, they tried to create the illusion of one.

“Strangely enough,” Mason writes, “even though Sally would always be hanging onto his arm, he never seemed very interested in her. I don’t think I ever saw him kiss her, although maybe that was just because of his mask.”

A scene with Silk Spectre is the only time that Hooded Justice actually appears in Watchmen. After taking a publicity photo of all the Minutemen together, Silk Spectre goes to change her outfit, whereupon the Comedian enters the room and makes increasingly insistent sexual advances on her, pummeling her to the ground and attempting to rape her when she refuses them. 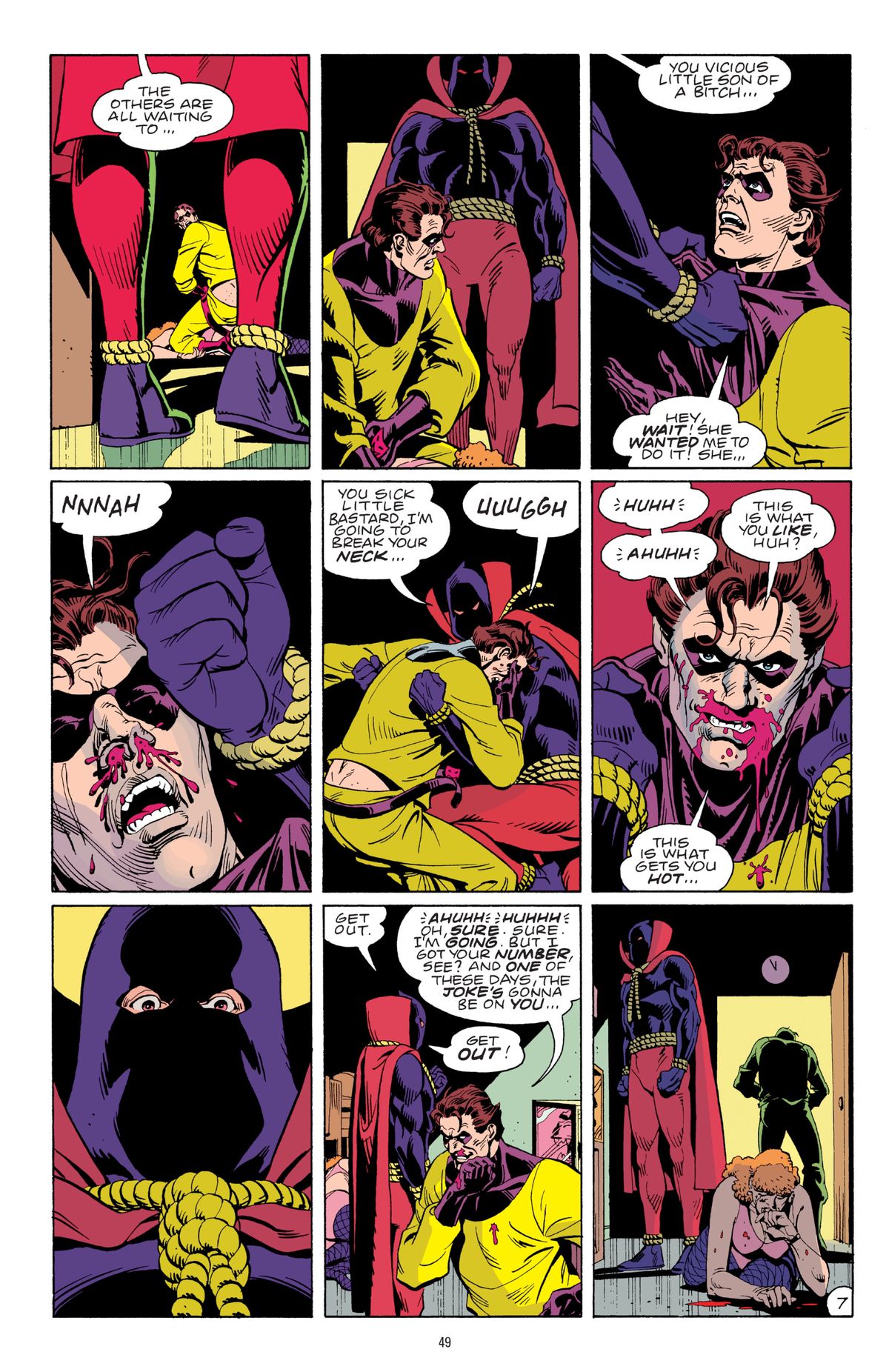 This is the only panel in Watchmen where we get a glimpse of Hooded Justice’s skin color, hidden by his costume everywhere but the hollows of his eyes. This scene, along with Mason’s comments on his relationship with Silk Spectre, is the source of the general assumption that Hooded Justice was a gay man and a sexual sadist.

Or at least, that’s one interpretation. Moore and Gibbons never elaborate on his motivations any further.

We know that Hooded Justice remained with the Minutemen for the group’s entire tenure, through to 1949 when it disbanded due to the changing American landscape. Then, in the 1950s, he, like other costumed crime fighters, was called to testify before the House Un-American Activities Committee — and reveal his true identity to one of the congressmen. He refused to unmask, and shortly thereafter he “simply vanished.”

“Or at least that’s how it seemed,” Mason writes. “Vanishing is no big problem when you’re a costumed hero — you just take your costume off. It seemed quite likely that Hooded Justice had simply chosen to retire rather than reveal his identity, which the authorities seemed perfectly happy with.”

Beyond these facts, all we have is Hollis Mason’s writings, which, while not necessarily lies, include a lot of speculation that is never corroborated anywhere else in the book. 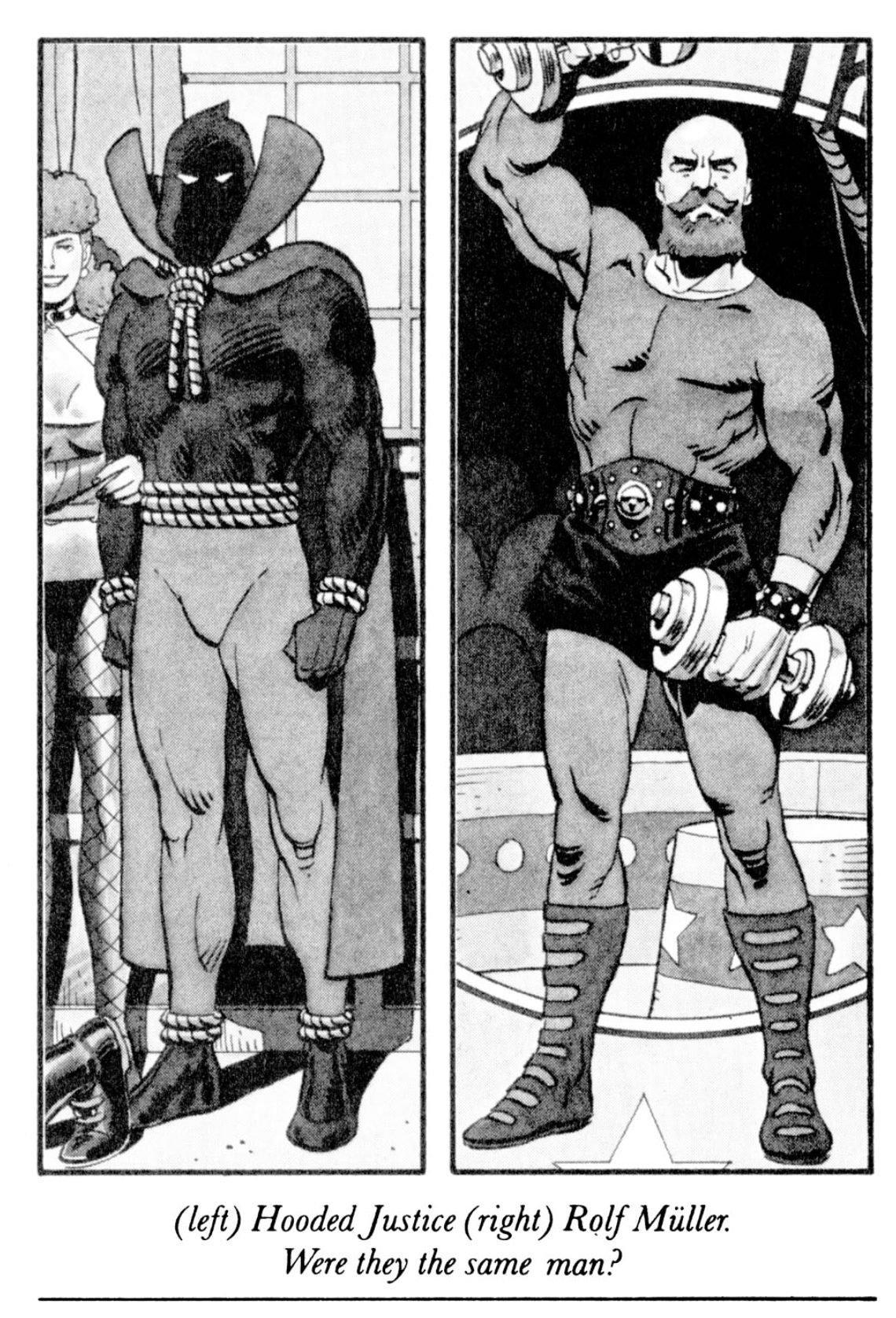 For example, he says that he “heard Hooded Justice openly expressing approval for the activities of Hitler’s Third Reich,” which certainly seems to conflict with the idea of Hooded Justice being a black man fighting for the safety of black lives. But it could also be the smoke screen of a black man trying to disguise his true heritage — or a misinterpreted statement from a man whose only connection to his parents was a piece of pro-German World War I propaganda aimed at conscripted black soldiers. The closest we come to corroboration on this is a panel in which Hooded Justice tells the Comedian that the Minutemen should avoid political situations, after the latter suggests that America should get involved in World War II.

Mason’s account is flimsiest when he talks about his theories of Hooded Justice’s identity and supposed death. He connects the disappearance of Hooded Justice with the death of “a well known circus strongman of the day named Rolf Müller,” as reported by Watchmen’s notoriously biased weekly rag, The Newfrontiersman. Mason connects Müller to Hooded Justice simply on the basis that they shared the same general build and disappeared at the same time.

“Whether the body washed up on that Boston shoreline belonged to Müller or not, neither he nor Hooded Justice were ever seen or heard from again,” Mason writes. “Were they the same man? If they were, were they really dead? If they were dead, who killed them? Was Hooded Justice really working for the Reds? I don’t know. Real life is messy, inconsistent, and it’s seldom when anything ever really gets resolved.” 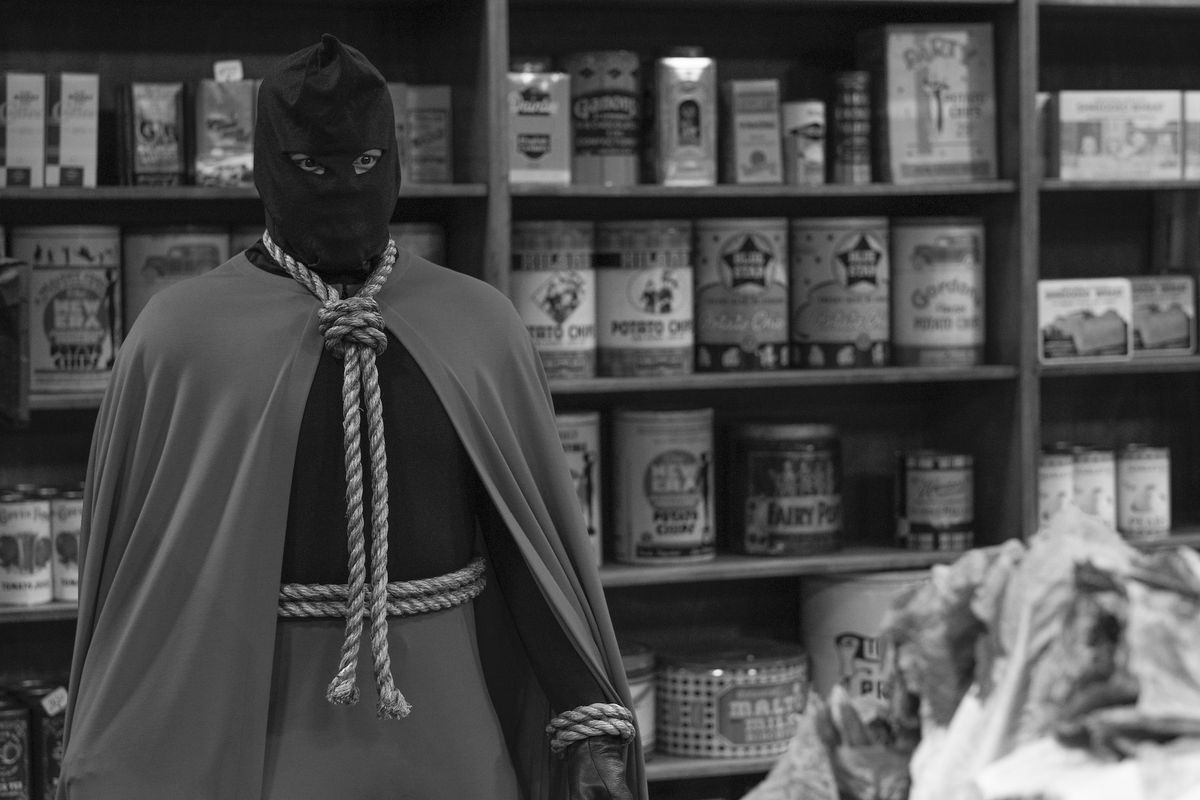 The show deftly fits new information into the gaps left by the book. Like Hollis Mason, William Reeves is a young police officer raised on pulp serial films and amused by the new pulp genre of the superhero comic book. After a formative incident in which he is nearly lynched by his fellow officers, he rescues a white couple from being mugged, wearing the same hood and noose over his head.

When the papers hail him as a hero, Reeves decides to continue, but on the counsel of his wife, he paints the only bit of skin exposed by his costume in the color of a white man’s skin — neatly explaining why in the only close-up of his face in the Watchmen comic, his skin appears pale. He becomes a hero in the public eye, and inspires imitators.

Captain Metropolis, the founder of the Minutemen, obviously wants to recruit the costumed hero that the rest of his potential recruits look up to. As Mason puts it in his book, “Dressing up in a costume takes a very extreme personality, and the chances of eight such personalities getting along together were about 75 million-to-one against.”

He advises Reeves to keep his race a secret. None of the Minutemen would exist without him, but they can never actually know him. In the intimate relationship they share — which the Comedian clearly picked up on — Captain Metropolis gaslights Hooded Justice into believing the Minutemen will help him take down the ring of Klan members plotting to murder hundreds of innocent black people. Just as soon as they take care of all these more publicity-friendly supervillains.

But Watchmen isn’t the only superhero context for Hooded Justice. 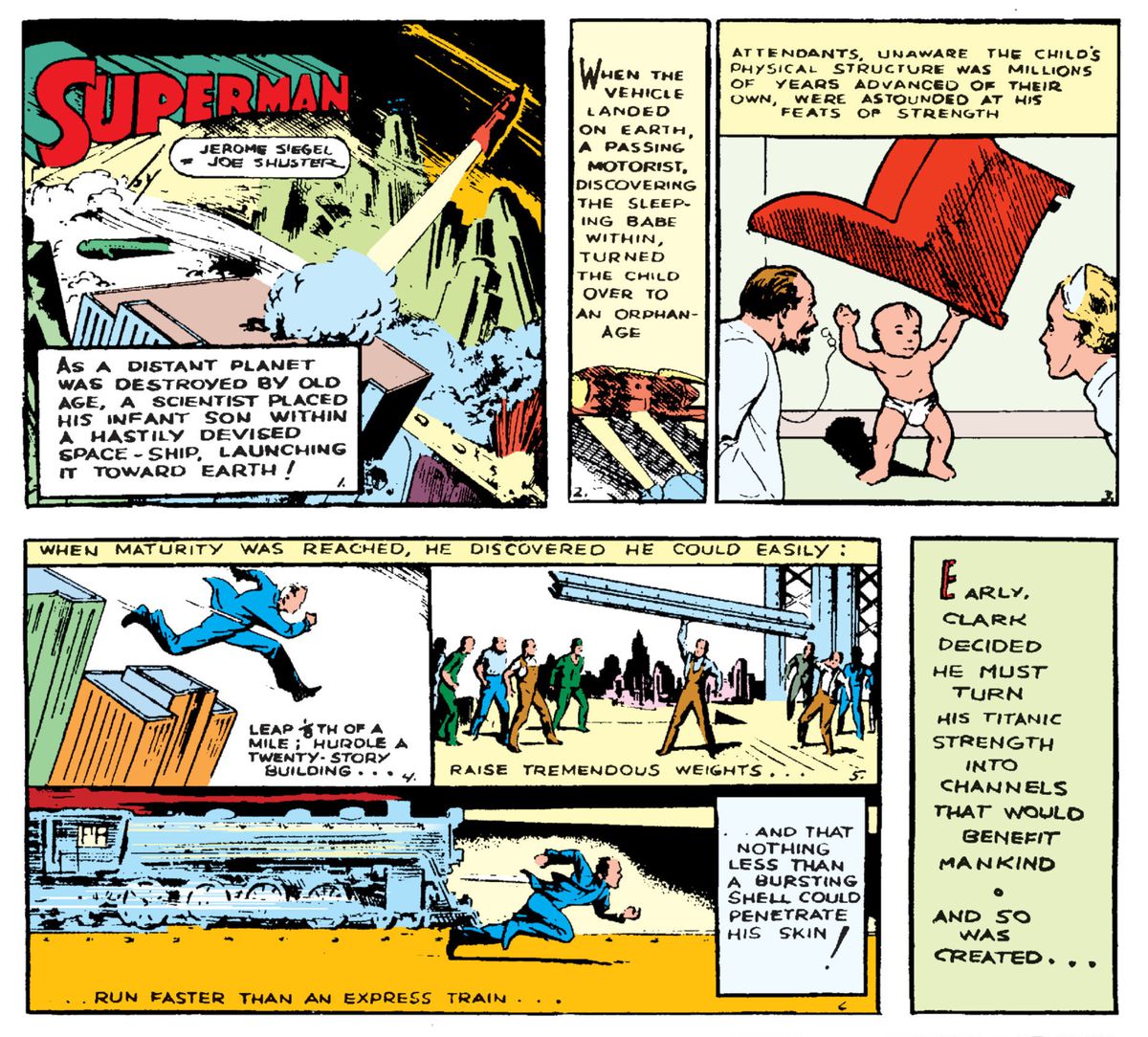 People say that Doctor Manhattan is the Superman of Watchmen, but there’s one significant aspect of the Man of Steel that Manhattan lacks. In the DC Universe, Superman is the superhero whose appearance inspired everyone else, and kicked off the setting’s “Age of Heroes.” Hooded Justice takes that role in the setting of Watchmen, and in “This Extraordinary Being,” the Watchmen TV series only ties him closer to DC’s flagship hero.

A scene where Reeves reads Action Comics #1, the first appearance of Superman, mirrors a scene in Mason’s memoir, in which he notices kids going nuts for comic books, borrows one from a child on his beat, and is immediately smitten with Superman. But it also hammers home the point that Reeves and Superman have the same origin story: children sent from a home about to be destroyed, by parents who could not themselves escape.

Heck, Reeves’ wife is even a newspaper journalist, making her a parallel for Lois Lane.

The biggest diversion HBO’s Hooded Justice reveal makes from the original Watchmen is giving it a superhero who is genuinely motivated by a desire to see justice done, rather than cynicism, ego, or because they find it sexually arousing. The episode even gives this major theme of its source material a good ribbing in its first scene, as a crude FBI agent sleazily suggests that (a fictionalized version of) Hooded Justice wears a noose because of “sex stuff.”

“This Extraordinary Being” posits something different and simple: that there are situations in which choosing to distrust the law is not a matter of personal gratification or desire for fame, but of community survival.