labor Amazon Workers Are Celebrating Prime Day With A Protest

Amazon has to do more than pay a $15 minimum wage to keep workers happy. Amazon has been facing a lot of protests lately. , Kevin Hagen/Getty Images

Amazon warehouse workers in Minnesota are striking during one of the company’s biggest sales days of the year: Prime Day. They’re demanding that the company ease productivity quotas, convert more temporary workers to Amazon employees, and do more to address on-the-job injuries.

Workers in Shakopee, Minnesota, which is about 25 miles southwest of Minneapolis, are striking for six hours and holding an afternoon rally outside Amazon’s warehouse on Monday, the first day of Amazon’s two-day Prime discount extravaganza. The strike, which Bloomberg reported last week, probably won’t have much of an impact on Amazon’s business — it has more than 100 warehouses in the United States — but it’s yet another example of both corporate and lower-level tech workers’ increased willingness to speak out against their employers. It also indicates that Amazon’s promise last year to pay a $15 minimum wage is not enough to keep its workforce happy forever.

“These should be jobs that are safe, reliable, and that people can depend on,” William Stolz, a striking worker at Amazon’s Shakopee warehouse, told Recode. Stolz, 24, is a picker at the facility and has worked there for two years. “It’s very mentally stressful; it’s very physically stressful,” he said of the work.

As Vox’s Alexia Fernández Campbell noted last week, warehouse workers, who “have long complained about punishing work conditions at Amazon’s fulfillment centers, are upset about the company’s recent decision to offer one-day shipping to Prime customers,” because it’s bound to increase the pressure and speed of their work.

Organizers estimated more than 100 workers would strike, but actual turnout numbers are unclear. The striking warehouse workers are being joined by a handful of Amazon engineers who are flying out for the walkout from Seattle. Among them is Weston Fribley, a software engineer who was one of the organizers of an employee push for Amazon to implement a climate-change plan. The initiative failed a shareholder vote in May.

“We see these issues as very deeply connected. At the root is Amazon employees not having a say in the decisions that affect their lives and their work,” Fribley told Recode. “I think both the workers here in Minnesota and us, working for climate justice — I think we understand that just seeing any of these improvements happening at Amazon, it’s going to take all of us working together.”

The Awood Center, a community organization for workers in Minnesota with East African heritage, is spearheading Monday’s strike. The group has helped Amazon workers engage in activism before — last year, they got Amazon to reduce workloads while Muslim workers were fasting for Ramadan and convinced the company to create a designated prayer spacefor employees. The Minnesota workers were the first ones to actually sit down and talk about working conditions with Amazon management, and they’re still pushing the company to be better.

“We see that our fights are stronger together,” Abdirahman Muse, the executive director of the Awood Center, told Bloomberg last week. Beyond the Awood Center, the Service Employees International Union, Teamsters, and Minnesota chapter of the Council on American-Islamic Relations are backing the strike.

Stolz said that some workers who had planned on striking appeared to have been “spooked” by something and decided not to strike, though he wasn’t sure what had happened. “We don’t have a majority of workers, but we’ve decided to go with the workers we have who are ready to make a stand on Prime Day because it doesn’t take all of us to be able to send a powerful message,” Stolz told Recode.

On some level, the strike is working; it’s attracting national attention, including from 2020 Democratic presidential contenders Sens. Elizabeth Warren (D-MA) and Bernie Sanders (I-VT). Both politicians have specifically targeted Amazon for criticism in the past.

I fully support Amazon workers' Prime Day strike. Their fight for safe and reliable jobs is another reminder that we must come together to hold big corporations accountable. https://twitter.com/UFCW/status/1150556843204366338 …

These men and women are standing up for what’s right. Let's show our support for them! https://bloom.bg/2NRcYSS

3,976 people are talking about this

A higher wage is only one component of the fight for workers' rights. Amazon workers deserve safe working conditions, fair scheduling, and reasonable production demands. I stand with Amazon MSP1 workers in Minnesota and their #PrimeDayAmazon strike! https://twitter.com/AwoodMpls/status/1150519440464842753 … 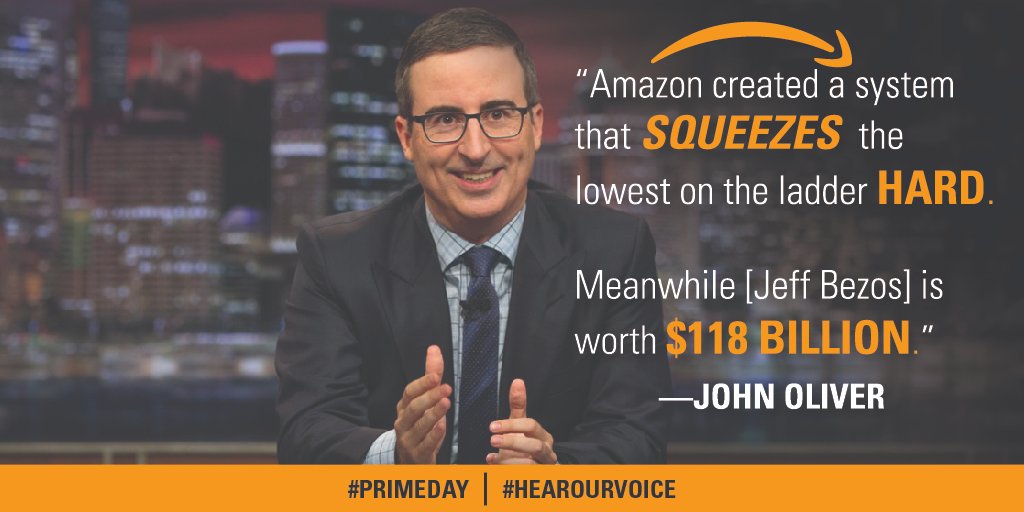 988 people are talking about this

It is seemingly unprecedented for US Amazon warehouse workers to strike on Prime Day. In Europe, however, Amazon strikes happens a lot. Per Fernández Campbell:

The planned strike is a bold move for US warehouse workers, who — unlike their colleagues in Europe — have never organized a work stoppage during a major shopping event. In November, on Black Friday, workers at Amazon warehouses in Spain, Germany, and France organized strikes, and protests were held in Italy and the United Kingdom. (The company’s warehouse employees in Europe are largely unionized.) A strike in the US, where Amazon workers are not yet unionized, shows just how frustrated and desperate some employees have become.

On Monday, Amazon workers in Germany are also striking to demand better pay. “If our coworkers see what’s going on here and see some of the successes that have come out of this … it will be more effective as more of our coworkers join us,” Fribley said.

Amazon spokesperson Julie Law told Recode in an email that Amazon Prime Day has become “an opportunity for our critics, including unions, to raise awareness for their cause.” She also pointed to Amazon’s $15 hourly minimum wage and benefits the company offers employees.

“If these groups — unions and the politicians they rally to their cause — really want to help the American worker, we encourage them to focus their energy on passing legislation for an increase in the federal minimum wage, because $7.25 is too low,” she said.

Amazon CEO Jeff Bezos announced last fall the company would start paying its workers $15 an hour. Many of the company’s critics, including Sen. Sanders, praised the move, though Sanders continued to attack the company on working conditions. (He named a bill last year after Bezos, taking aim at so-called “corporate welfare.”) Even former Vice President Joe Biden, a more moderate contender in the 2020 race, has criticized Amazon.

I have nothing against Amazon, but no company pulling in billions of dollars of profits should pay a lower tax rate than firefighters and teachers. We need to reward work, not just wealth. https://www.nytimes.com/2019/04/29/us/politics/democrats-taxes-2020.html …

Profitable Giants Like Amazon Pay $0 in Corporate Taxes. Some Voters Are Sick of It.

In Ohio, where companies like FirstEnergy and Goodyear pay no federal corporate taxes, Democrats haven’t figured out how to leverage anxiety over income inequality to defeat President Trump.

3,543 people are talking about this

Monday’s strike is the latest example of a growing trend of tech workers speaking up publicly about their disagreements with their employers, on both ethical issues and workplace policies. Recode’s Jason Del Rey dug on it earlier this year:

Last April, thousands of Google employees signed a letter protesting the company’s work for the Pentagon. In November, more than 20,000 Google employees participated in an organized walkout following a bombshell report that company leadership gave a $90 million payout to a top executive pushed out over sexual misconduct claims.

Amazon employees have challenged management over the last year, too, on issues ranging from the lack of diversity on its board of directors to selling its facial-recognition software to the police.

And sometimes, workers are getting results, as the Minnesota Amazon workers have in the past. They’re certainly getting attention: On Monday, the hashtag #PrimeDayAmazon trended on Twitter. But people were also tweeting about #AmazonStrike, and urging consumers to boycott Prime Day sales in a show of solidarity for workers.

Recode and Vox have joined forces to uncover and explain how our digital world is changing — and changing us. Subscribe to Recode podcasts to hear Kara Swisher and Peter Kafka lead the tough conversations the technology industry needs today.