labor Teaching Assistants Go On Strike at University of Illinois at Chicago: ‘We Have To Fight For The School To Care About Us’

Graduate student employees at the University of Illinois at Chicago, saying they don’t earn a living wage, went on strike Tuesday after more than a year of contract negotiations failed to produce a new work agreement.

Graduate student employees at the University of Illinois at Chicago, saying they don’t earn a living wage, went on strike Tuesday after more than a year of contract negotiations failed to produce a new work agreement.

Graduate and teaching assistants formed picket lines outside of several east campus buildings and held an afternoon rally and march.

Leaders of the Graduate Employees Organization, which represents more than 1,500 graduate student university workers, said they plan to strike indefinitely. Their previous contract expired in September, and 99.5 percent of members formally authorized a strike in February, the union said.

A university statement from Chancellor Michael Amiridis, Provost Susan Poser and Vice Chancellor Robert Barish said the university has participated in 22 negotiating sessions, including five with a federal mediator.

Students and faculty are still expected to report for classes, officials said. It was not immediately clear how many classes have been affected or how many employees elected not to teach, but senior administrators told department deans Monday that they expected all graduate students to strike. Deans were expected to maintain a count of who was working and who was not. 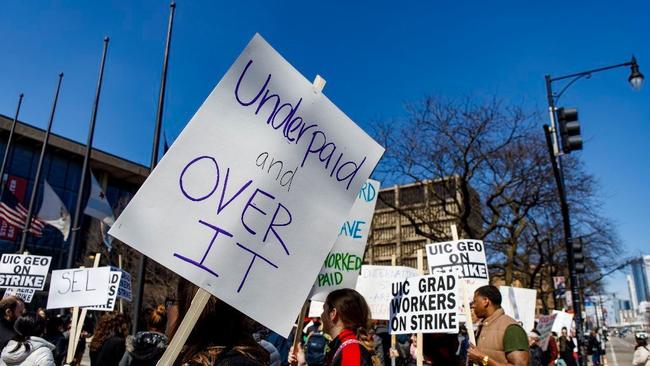 Graduate student employees of the University of Illinois at Chicago picket March 19, 2019, outside the Jane Addams Hull-House Museum on campus as they strike during contract negotiations. (Brian Cassella / Chicago Tribune)

“We believe that this work stoppage is not in the best interest of the university, or our students,” the administrators’ statement reads. “All members of the university community will be expected to meet for classes as usual. During a strike, the university is committed to continuing normal operations to the fullest extent possible. Students and parents can be assured that educational objectives will be fulfilled, and grades should not be affected.”

In a message to the university’s deans, Poser wrote that faculty “may not strike in sympathy and are expected to teach their classes.” The memo added that faculty “are responsible for figuring out how to cover the material not covered when their TA chooses to strike and not to teach.” Classes will not take place next week because of spring break.

Juliana Bernier, a graduate assistant pursuing her master’s in social work, was among those on the picket lines.

“It’s frustrating having to go to this level, striking against our own institution,” said Bernier, 23. “We’re still students. It feels like we have to fight for the school to care about us.”

Tuesday afternoon, with university staff members watching, more than 200 workers and supporters coalesced outside the Student Center East and began marching up and down the sidewalk along South Halsted Street, banging makeshift drums, blowing plastic horns and chanting.

Yoshizaki-Gibbons said many of her colleagues are constantly battling income insecurity because of their pay and the costs of living in Chicago. She said she’s currently on a fellowship but previously has worked as a teaching assistant and has another teaching assistant job scheduled for next year.

“Students are going more and more into debt,” she said. “When I came here, I had very little debt. Now I have way more because I’ve had to take out loans to subsidize my pay.”

Many of the strikers said another issue affecting graduate instructors is tuition differentials, which are costs added to base tuition that vary depending on the program. For example, an in-state, full-time graduate student in fall 2019 would pay a base tuition of $5,830 per semester. If that student pursues an MBA, he or she would pay another $4,600 in tuition differential per semester. Someone pursuing a master’s in art history, by contrast, would pay another $1,837.

Mari Miller, a graduate assistant in the business school in her first year at UIC, said fees and differentials add another $3,000 per semester to her costs.

“There’s nothing left once you make your tuition payment. There’s no money for food, rent,” said Miller, 31, who is studying industrial design. “If I didn’t have a partner who makes enough to support me, I wouldn’t be able to live.” 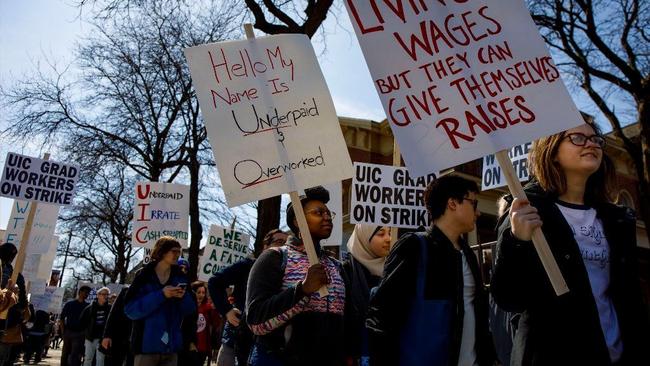 Graduate student employees of the University of Illinois at Chicago picket March 19, 2019, outside the Jane Addams Hull-House Museum on campus as they strike during contract negotiations. (Brian Cassella / Chicago Tribune)

The strike at the Near West Side campus bears similarities to a February 2018 strike at the University of Illinois at Urbana-Champaign. There, graduate employees walked off the job for nearly two weeks in an attempt to secure better salaries and guaranteed tuition waivers. Such waivers refer to a portion of tuition that graduate employees are excused from paying as a condition of their work.

The Urbana-Champaign strike represented the first such walkout by those workers in nearly a decade. The two sides eventually came to an agreement that included salary increases as well as guaranteed tuition waivers, among other provisions.

UIC administration and graduate workers are clashing over many of the same issues.

Graduate employees receive a minimum salary of $18,065 for two semesters of 20-hour work weeks. They also receive the equivalent of $13,502 in tuition and fee waivers, according to the administration.

The university has offered an 11.5 percent increase of the minimum pay over three years. The graduate union is seeking a 24 percent pay bump over three years, plus more tuition waivers.

The administration said the union wants the university to cover the full cost of mandatory student fees, but GEO Co-President Jeff Schuhrke disputed that. The union’s initial proposal was to waive all general fees, but now employees are seeking to freeze or partially waive that expense.

Graduate and undergraduate students currently pay $431 per semester in fees. That will increase to $481 in the fall. International students pay an additional $130 per semester.

“UIC is dependent on the revenue from the general and international fees and is unable to meet requests to waive those fees for GEO employees,” according to the university statement.

“Many grad workers simply can’t afford to pay the fees when they’re due at the start of each semester, so they have to get on a payment plan provided by the university,” Schuhrke said in an email. “But in order to even be able to get on the plan, they first have to pay a $40 fee (a fee to pay other fees).”

The union also is seeking to have the university cover a larger share of the required health fees to enroll in the Campus Care program.

School leaders said bargaining teams are scheduled to meet again Friday. Union leaders plan additional rallies and picket lines throughout the week and said they also will continue the strike through spring break, if necessary.

The UIC strike is part of a burgeoning labor movement that has galvanized graduate employees as well as adjunct and nontenured faculty members at campuses nationwide in recent years.

Much of that momentum was sparked in 2016 when the National Labor Relations Board ruled graduate students at Columbia University in New York qualified as employees who could negotiate with the university in collective bargaining.

Following that, a wave of graduate students organized on campuses throughout the country, including at University of Chicago and Northwestern.

Universities have largely fought the characterization of students as workers, saying their primary objectives are to conduct research and obtain a degree. In multiple cases, universities have refused to negotiate with graduate students on that basis.

Part-time faculty at Loyola and Columbia College staged walkouts in 2017 and 2018.

The UIC graduate employees quickly won support from unions at other schools, from UIC’s tenured faculty union — also in the middle of contract negotiations — and from the Chicago Teachers Union.

“These vital laborers deserve living wages and an end to exploitation, and it’s long past time for UIC’s management to reset its distorted priorities and settle a fair contract with UIC’s GEO,” CTU President Jesse Sharkey said in a statement. “To do any less is to make a mockery of the values of the institution, and undermine the next generation of scholars that management claims it is committed to nurturing.”