Voters in Florida approved an amendment to the state constitution that would restore voting rights to as many as 1.5 million former felons. Registration began on Tuesday. DORAL, Fla. — For years, the state of Florida did not allow Clarence Office Jr. to vote. Instead, he encouraged relatives, colleagues and neighbors to register — and bring a buddy, so they could expand the universe of people who, unlike him, had rights to exercise at the ballot box.

On Tuesday, when a historic amendment to the Florida Constitution restoring the voting rights of as many as 1.5 million former felons went into effect and Mr. Office was finally able to register himself, he made sure to follow his own advice. He brought a co-worker, Lorenzo Latson Sr., to the Miami-Dade County elections headquarters in Doral, Fla., where they waited their turn.

In a matter of minutes, the two men completed their paperwork and smiled. Soon, they expect to receive registration cards in the mail making their voter status official.

The measure known as Amendment 4 was approved in November by nearly 65 percent of Florida voters, leaving just two other states — Kentucky and Iowa — with laws in place that prevent people with felony records from voting. But the state’s new governor, Ron DeSantis, a Republican who was sworn into office on Tuesday, has suggested that the amendment could face challenges down the line.

Mr. DeSantis has said state lawmakers should craft legislation when their session begins in March to define exactly which former felons are now eligible, though the amendment appears to lay that out explicitly.

“It’s not delaying it — the people spoke on it,” Mr. DeSantis told reporters in Tallahassee, the state capital, on Monday. “But I think it’s got to be implemented the way that the people intended. And I don’t think that they wanted to see any sex offenders fall through the cracks.”

The language of the amendment was intended to be self-executing, making the restoration of rights automatic for former felons without murder or felony sex convictions “after they complete all terms of their sentence including parole or probation,” without the need for any additional legislative rules. Previously, ex-felons could apply for re-enfranchisement from the governor and state Cabinet, but that strict clemency process was long and laborious, with no set criteria for success.

More than five million Floridians voted in favor of Amendment 4. That’s more votes than any candidate on the ballot received.Politically, the prospect of potentially adding hundreds of thousands of people to the Florida voter rolls has excited the state’s Democrats, who point to the fact that African-Americans, who tend to vote Democratic, have been disproportionately disenfranchised in the nation’s largest presidential battleground state (though the majority of the population with felony convictions is white). Three statewide races in November were so closely contested that their results required recounts. 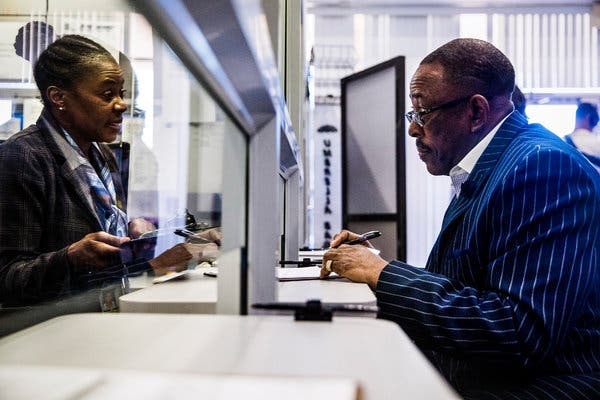 Mr. Office was able to register to vote after an amendment to the Florida Constitution restored the voting rights of former felons. Credit Scott McIntyre for The New York Times

“Democrats will never stop fighting to expand access to the ballot and ensure that no one is silenced or sidelined on Election Day,” Tom Perez, the chairman of the Democratic National Committee, said in a statement on Tuesday.

But Daniel A. Smith, the chairman of the political science department at the University of Florida who studies the state’s electorate, said it was “fanciful” to expect Florida’s voter rolls to swell quickly. He noted that re-enfranchised felons may not necessarily be politically active — or lean toward any particular party.

“I’m kind of skeptical that we’re going to see this big jump in terms of new registrations,” Professor Smith said. “I think it’s going to be a slow trickle, and it’s probably going to be realized over the next several years.”

Elections supervisors began accepting former felons’ registrations on Tuesday. No changes were made to the paperwork; as usual, every new voter must affirm that he or she is not a felon or that his or her right to vote has been restored. After Amendment 4 was adopted, Florida’s division of elections stopped matching voter registrations to a felony database, a process that used to initiate felon purges from the rolls.

Some former felons worried that future restrictions imposed by the Legislature could result in inadvertent inaccuracies on their voter registration forms. What if they had unknowingly failed to pay a court restitution fee of some sort and were accused of fraudulently registering to vote?

State Attorney Katherine Fernández Rundle, a Democrat from Miami-Dade, the state’s largest county, said she would not prosecute any cases of that sort, signaling to former felons that it would be safe to register. Still, advocates who have fought for years to re-enfranchise former felons, including the American Civil Liberties Union, say they will be ready to go to court to defend the amendment if needed.

Howard Simon, the former executive director of the Florida A.C.L.U., retired after the election, having worked on felon rights restoration for 18 years. He said people have reason to be suspicious of legislative interference — which is why the constitutional amendment was needed.

“Voting rights can’t be hostage to every change in political administration,” Mr. Simon said. “Ultimately, we’ve got to drag Florida kicking and screaming out of the post-Jim Crow civil rights era.”

For hopeful new voters like Mr. Office, an Army veteran who now works as a liaison for the Department of Veterans Affairs helping veterans entangled in the local criminal justice system, registering brought “a sense of renewal.”

“It was an injustice not to be able to vote,” he said. Associating with “shady people” led him to drug addiction and a long list of crimes in the past, he said, “but now, that’s not me. I’m a totally different person now — just like a lot of other people who have come to register.”

Shortly before Mr. Office and Mr. Latson sat down to fill out their registrations — both without party affiliation — a man in a Miami Dolphins baseball cap, Jerry Armstrong, stood up and pumped his fist in the air in celebration. He is a former felon, too, registering to vote for the first time, at 45.

“I never voted a day in my life,” Mr. Armstrong said. Now, he added, “I feel like I am a United States citizen.”

Patricia Mazzei is the Miami bureau chief, covering Florida and Puerto Rico. Before joining The New York Times, she was the political writer for The Miami Herald, where she reported on the 2016 presidential election, the Cuban diaspora and natural disasters. A University of Miami graduate, she was born and raised in Venezuela, and is bilingual in Spanish. Follow Patricia Mazzei on Twitter: @PatriciaMazzei.

A version of this article appears in print on Jan. 9, 2019, on Page A10 of the New York edition with the headline: Their Rights Restored, Felons in Florida Begin Registering to Vote. Subscribe