Today President Trump released his second presidential budget request, and it looks much like the first. His priorities are clear: ever-increasing funds for the Pentagon, nuclear weapons and Homeland Security, and massive cuts to almost everything else.

The budget deal Congress passed last week puts 54 percent of the discretionary budget into the Pentagon and nuclear weapons. The budget proposal President Trump released today would increase that to 61 percent in 2019.

The president would cut funds for the major means preventing military conflict, the State Department and foreign aid, by 41 percent, at the same time that he bulks up the Pentagon. Also among the hardest hit are energy and environmental programs which would receive a 36 percent cut, while housing and community programs would receive a 35 percent cut. 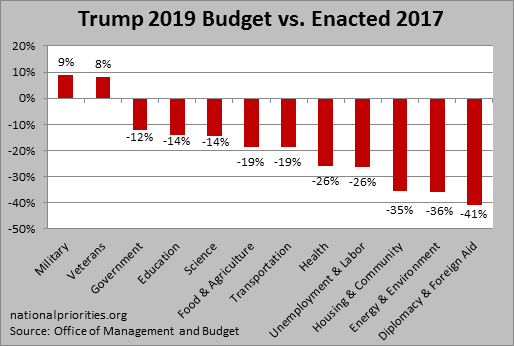 Compared to the budget deal Congress just passed, the president's vision for military spending is right in line, with a less than one percent, or $3 billion, difference. But the president would cut more than $120 billion from nonmilitary programs compared to what Congress negotiated.

It's worth noting that presidential budgets almost never come to pass. But as a declaration of values, this budget proposal is crystal clear.

Your gift helps NPP build a better budget for our nation! Make your gift now to support our work.